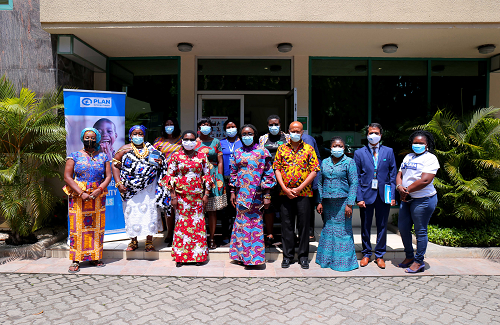 Some of the dignitaries at the launch

The Plan International Ghana has launched a campaign to protect girls and young women in Ghana from online abuse and harassment.

Dubbed: “FreeToBeOnline”, which was launched on Thursday, October 8, 2020, the campaign, which was launched alongside “The State of the World’s Girls Report” to mark this year’s International Day of the Girl, seeks to create awareness on online safety from abuse and harassment for the girl-child.

The report (The State of the World’s Girls Report) is aimed at bringing the issue of online abuse to the forefront especially the way it is disproportionally affecting girls and young women.

Speaking at the launch, the Country Director of Plan International Ghana, Mr Solomon Tesfamariam, said although many efforts have been put in place to deal with the various challenges girls and young women face, such efforts face new kinds of challenges on a daily basis with the current being online abuse and harassment.

“As we all work towards the resolution of these age-long issues, we are further faced with a growing menace, which has emanated from the advent of the technological world which we are gradually transitioning into,” he noted.

Some of the participants

He said “Abuse and harassment facing girls are fast becoming major threats to girls, with very limited measures to protect them from online gender based violence, especially in these times of the COVID-19 pandemic.”

“Online violence silences girls, it’s a barrier to their leadership. Therefore it has become apparent that the concept of online safety and harassment must be understood by girls from different perspectives and its devastating effects on girls’ empowerment,” Mr Mr Tesfamariam explained.

According to him, a study conducted by Plan International in 22 countries found over 14,000 girls to have been abused and harassed online.

That, he pointed out that, “Some overarching categories of harassment found includes the threats of sexual violence; sexual harassment; threats of physical violence; attacks on the girls’ appearance or intersectional characteristics, including body shaming; unauthorised sharing of the girls’ content, including for the purpose of embarrassing the girls publicly; stalking; and generally insulting and abusive language.”

A panel discussion at the launch

He said the inspiration for the report “comes from Plan International’s desire to have metrics for assessing the unique vulnerabilities and challenges faced by girls online”, adding that “Girls are targeted online just because they are young and female, and if they are politically outspoken and disabled, it gets worse.”

Mr Mr Tesfamariam expressed the worry that at the moment very little is being done to protect girls and young women online, stressing that the launch of the report will help create the needed awareness and visibility around the harm caused girls and young women’s through online abuse and harassment.

He has, therefore, called on all, particularly the government and society as a whole to monitor “this abuse rigorously and for social media companies to use their technological skills and financial resources to put freedom online for girls and young women at the heart of their agenda.”

Ama K. Abebrese, Ghanaian actress, television presenter and a producer explaining a point at the launch

For him, clamping down on abusers of girls and young women online could be achieved by creating effective and accessible reporting mechanisms that target gender-based violence, holding perpetrators to account, and collecting disaggregated data that acknowledges girls’ intersecting identities and tracks the scale and size of the problem.

In a speech read on her behalf, the UNICEF Country Representative to Ghana, Anne-Claire Dufray, said it was the vision of UNICEF to promote gender equality and the empowerment of girls in Ghana.

According to her, the "Plan International's report that is being launched today adds to the growing global evidence related to children and young people's experiences online. The report indicates that 58% girls in the survey experienced online harassment."

Ms Dufray said while UNICEF “is happy with the progress the government has made to secure the safety and protection of children in the digital space, it is crucial for us to highlights the collective responsibility placed on all of us including children and young people to create a safer digital environment for all."

She added that "UNICEF is working with the government of Ghana to support efforts to make the internet a safer digital environment for children."