PHOTOS/VIDEOS: UG on hunt for perpetrators of Commonwealth/Sarbah clashes 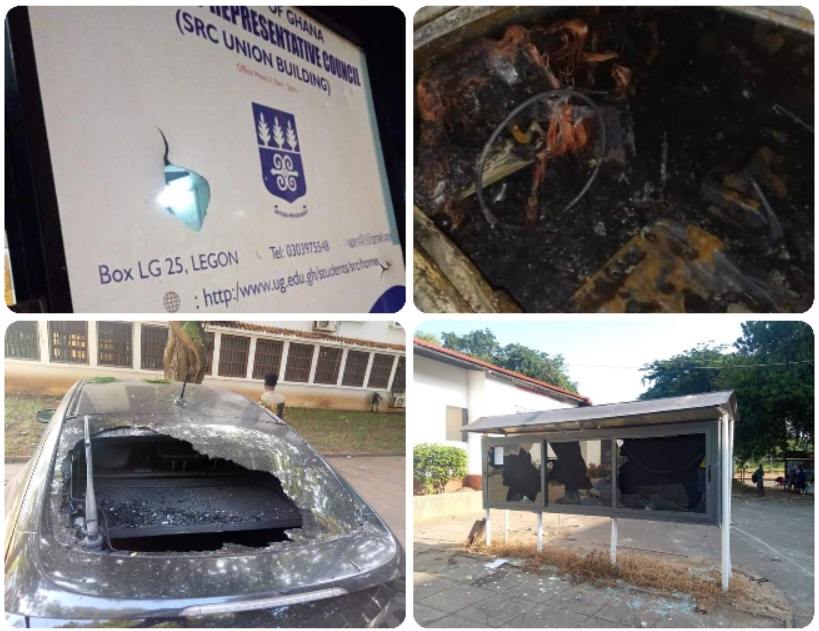 A vehicle parked at the Mensah Sarbah Hall of the University of Ghana was set ablaze during a clash between students in the early hours of Saturday, August 6, 2022.

The reason for the clash between members of the Commonwealth and Mensah Sarbah halls is not clear but university property was destroyed during the inter-hall fight.

In a statement condemning the violent clash, the management of the university said efforts were ongoing to identify and sanction the perpetrators.

"Management of the University has noted with concern, yet another series of clashes between students of Commonwealth and Mensah Sarbah Halls, which occurred late in the evening of Friday, August 5th, and in the early morning hours of Saturday August 6th, 2022," the statement said.

"Management condemns these needless acts of violence that have led to injuries and destruction of property, and calls on students of the two Halls to immediately halt any planned continuation of these acts.

"Efforts to identify the perpetrators are ongoing, and those found culpable of breaking national laws or University regulations will be appropriately sanctioned.

"Management assures the University community of its resolve to ensure that academic work and other activities proceed without hindrance, and of its commitment to safeguarding peace and stability on all campuses of the University".