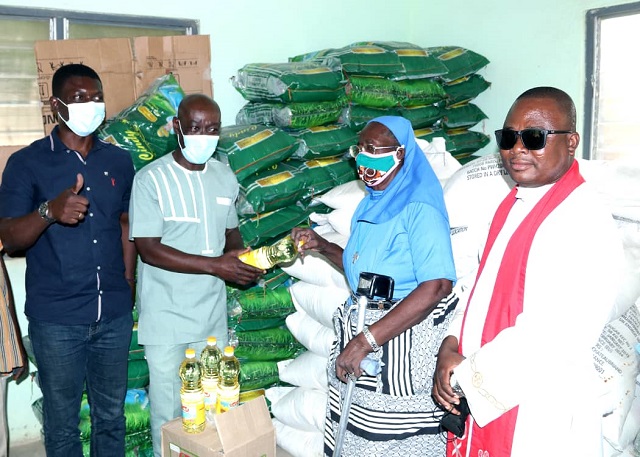 Mr. Thaddeus Sory makes a symbolic presentation of the gift items to the leadership of the widows association Follow @Graphicgh

The smiles have once again returned to the faces of the Saint Monica's Widows Association of the Daffiama Roman Catholic Church in the Upper West Region following a philanthropist's support.

For the third year running, lawyer and philanthropist, Mr. Thaddeus Sory who hails from the area has been donating food items, mattresses and second-hand clothing estimated at thousands of Ghana cedis to assist them during the Easter celebrations.

Presenting the items, Mr. Sory said it has been his personal desire for these past three years to come to their aid with the items during this period.

This year, Mr. Sory said he collaborated with an Accra-based NGO, Mummy and Me which is focused on the welfare of children and the under-privileged to acquire the items for the members of the association.

The items was also to enable them and their families to partake in the Easter Celebrations, he said.

Receiving the items, the Founder of the Association, Sister Gabrilla Nonaah said she formed it in 1995 to train the widows in leadership courses and income generating ventures such as pito brewing, soap making, shea butter extraction and trading activities to assist them to improve their livelihoods.

This was because widows in the region found it very difficult to make ends meet after they have lost their husbands. She said the widows own no farms and cannot go back to their parents since they became properties of their husbands’ families upon their marriage and with other challenges on the part of the husbands’ families, caring for them became difficult. She said because of this they are mostly left to fend for themselves.

That was why, she said, the Roman Catholic Church decided to bring them together into an association. According to her, she had earlier formed such an association at the Nandom Parish and brought the idea to Daffiama after which they were provided with loans as start-up funds.

For his part, the Chaplain of the Widows Association, Reverend Father James Nasaalbbeteryeb expressed his utmost gratitude to the donors and said the members are elderly women who are past child-bearing, mostly illiterates, very weak and aged.

He therefore appealed to the general public to come to the aid of the widows and help put some smiles on their faces again.