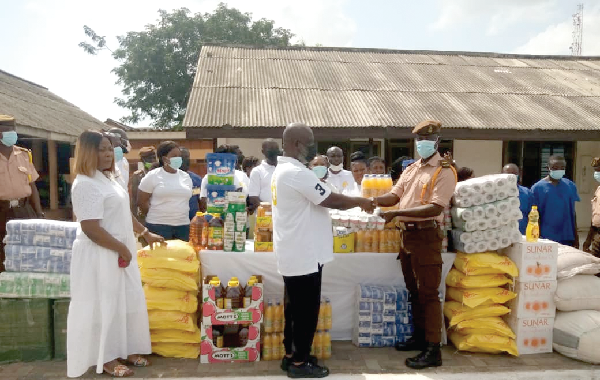 A businessman, Chief Kofi Ohene, has made a donation worth thousands of Ghana cedis to the James Camp Prison at North Ridge, Accra, as part of the celebration of his 60th birthday last Sunday.

Presenting the items, Chief Ohene said he was thrilled to join the inmates of the prison, whom he called his brothers and sisters, having received the blessings of God for the past 60 years.

He said he could not have chosen any other better place than the James Camp Prison, stressing that “whatever I am doing today is for God and country”.

The Acting 2IC, Supt. Emmanuel Darfour, received the items on behalf of the Camp Prison.

He expressed the gratitude of the authorities and inmates of the Camp Prison to Chief who was accompanied by some family members and friends for his kind gesture and expressed the hope that the items would go a long way in putting smiles on the faces of the inmates whom the state spent GH₵1.80p on each inmate a day.

Chief Ohene and his entourage later paid a courtesy visit to the Deputy Director of Prisons and Officer-in-Charge of the James Camp Prison, Mr Raphael Tuekpe, who also thanked them for donating to the inmates.

In the view of the Mr Tuekpe, donations from private individuals helped inmates to integrate properly into the society after serving their custodial sentence and urged the public to emulate such kind gesture.

“Donations like this make the inmates feel a sense of belongingness so that when they go out they don’t wage war on the society.

But if we are not treating them like this and we shun them, anytime they go out, they become peeved and when they are peeved, the consequences are not good at all as they will not spare us.

So, it is good that we will come to their aid from time to time”, he noted.