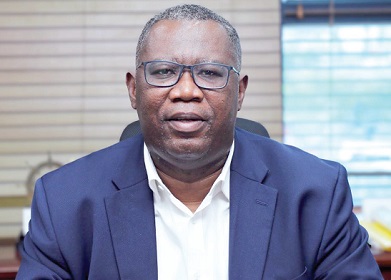 The Petroleum Commission (PC) is leading a national discussion on opportunities to raise funds to boost the exploration and production of petroleum resources.

That would be part of a pragmatic and practical step towards promoting local content and help develop local participation in the oil, natural gas and coal industry, the Chief Executive Officer (CEO) of the commission, Egbert Faibille Jnr, told the Daily Graphic in Accra last Friday.

He said boosting investments in upstream petroleum exploration and production had become critical because international investor agencies, such as the World Bank, the International Finance Corporation (IFC) and the European Investment Bank, wanted to disembark on funding new exploration projects.

That was due to current global conversations around transitioning from fossil-based energy production and consumption to renewable energy sources such as wind and solar, as well as lithium-ion batteries, he explained.

He noted that that development was fast dwindling investments in petroleum resources exploration and production, especially in Africa.

Mr Faibille said major oil companies, such as Shell, Chevron and Exxon Energy, had also been given up to 2040 to achieve net zero carbon emission in their operations.


He said to reverse the trend, countries in Africa, such as Ghana, needed to readjust their policies to attract more investments into the exploration of oil and gas before the onset of the energy transition.

“Increased exploration and production will further enhance local content in the oil and gas sector,” he said.

The CEO of the PC was speaking in an interview ahead of the 2022 edition of the Local Content Conference and Exhibition (LCCE) to be held in Takoradi in the Western Region.

On the theme: “Sustained local content development through enhanced exploration and production activities in the era of energy transition”, the conference is meant to provide policy makers and stakeholders a common platform to deliberate on happenings in the oil and gas industry.

The three-day event (November 22-24, 2022) is expected to attract about 1,000 participants, made up of stakeholders from the local and foreign petroleum industry.

The Minister of Energy, Matthew Opoku Prempeh, and Western Regional Minister, Kwabena Okyere Darko-Mensah, are billed to attend the conference, which will also welcome delegates from Nigeria, Trinidad and Tobago, Brazil, Mozambique and Kenya.

The eighth edition marks the return of the conference in-person after the outbreak of COVID-19.

Mr Faibille said the PC had been mandated to regulate and manage the utilisation of petroleum resources and coordinate the policies in the upstream petroleum sector.

He said oil and gas had become one of the key drivers of the economy, as they were crucial to the development of the country.

He explained that the theme for the conference had been chosen because the world was moving towards net zero emission; that is, shifting from fossil-based systems of energy production and consumption — including oil, natural gas and coal — to renewable energy sources.

The Director in charge of Local Content at the PC, Kwaku Boateng, said energy transition offered both challenges and opportunities for local content development in the upstream petroleum sector in the country.

He said investment in petroleum resources exploration and production was dwindling with the advent of the energy transition.

That, he said, was impacting negatively on local content participation in the upstream petroleum exploration and production.