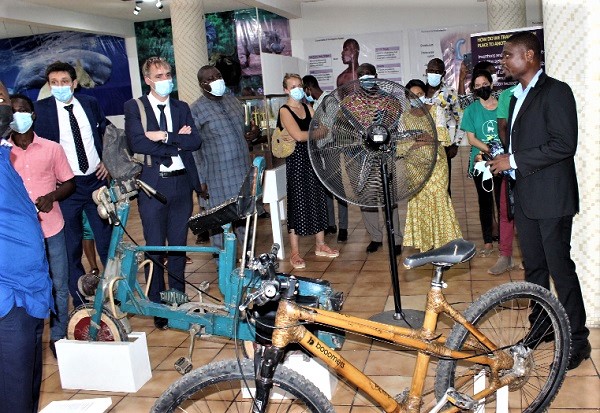 Some patrons at an exhibition mounted by the Museum of Science and Technology (MST) in Accra have called on the government and other stakeholders to provide more funds to revamp museums in the country.

They noted that such a measure would ensure that the sector made an important contribution to tourism, education and the preservation of the country's cultural heritage.

The patrons included members of academia, donor partners and representatives of the French Embassy in Accra.

There were assorted collections and exhibits at the MST's gallery in four categories — communication, transportation, human biology and wildlife.

Some of the collections were a wooden bicycle, gramophones, the African elephant skull, chassis of a Rover car, a propeller engine for aircraft, mobile phones, crank telephones, among others.

The exhibition, dubbed: “Back to the Science Museum”, was supported by the French Embassy.

The Deputy French Ambassador to Ghana, Raphael Malara, and the Head of the Physics Department of the University of Ghana, Legon, Dr Martin Egblewogbe, both told the Daily Graphic on the sidelines of the exhibition that museums played crucial roles in the overall development of any nation.

They said such facilities, therefore, needed adequate resources to impact generations and development, including the preservation of collections for posterity.

Mr Malara noted that the French government attached much importance to the development and sustenance of museums.

Dr Egblewogbe said the revived MST was just the first step to ensuring that the museum was well equipped to serve as a platform for practical teaching and learning purposes.

The Head of Co-operation of the French Embassy, Alexandre Foulon, said under the French Embassy’s Sankofa Project, GH¢34,800 was spent to renovate some World Heritage Sites in Ghana on the United Nations Educational, Scientific and Cultural Organisation (UNESCO) tentative list, including the Upper East Regional Museum at Bolgatanga and some traditional buildings in the Ashanti Region.

The Executive Director of the Ghana Museums and Monuments Board (GMMB), Kingsley Ofosu Ntiamoah, said the exhibition was in line with the government's renewed commitment of advancing the frontier of science and technology and promoting Science, Technology, Engineering and Mathematics (STEM) education through the National Science, Technology and Innovation Policy.

Mr Ntiamoah noted that “the exhibition seeks to invoke scientific consciousness, innovation and creativity among children, particularly those at the basic level, by observing and interacting with the objects displayed and participating in scheduled workshops”.

He explained that the core mandate of the MST was to ensure that scientific skills and appropriate technologies in Ghana were preserved for purposes of public education through exhibitions and teaching aids.

He, therefore, commended the French Embassy for supporting the capacity-building of the GMMB staff through the Sankofa Project.