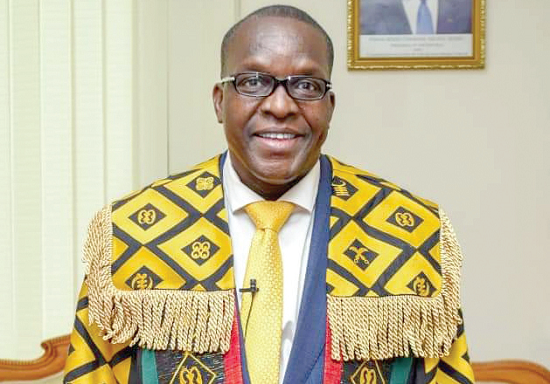 The first session of the eighth Parliament resumed yesterday after a three-week suspension that was aimed at curbing the spread of COVID-19 among members and staff of the House.

The House is expected to consider a number of critical businesses prior to adjourning sine die on March 30, 2021.

Some of the urgent businesses that came up on the floor of the House yesterday included the laying of the report of the Appointments Committee on the President’s nominations for ministerial appointments.

The report was subsequently distributed to the members of the House to deliberate on prior to a full debate by both sides on the observations and recommendations by the 26-member committee.

Soon after the Chairman of the committee, Mr Joseph Osei-Owusu, had laid the report, the Speaker of Parliament, Mr Alban Kingsford Sumana Bagbin, expressed the belief that the House would consider, with expedition, the report within the next few weeks to facilitate government business.

Message on state of the nation

The Speaker also said during the current meeting, the House would receive the President who was obligated by Article 67 of the Constitution to deliver to Parliament, a message on the state of the nation at the beginning of each session of Parliament and the dissolution of Parliament.

“His Excellency has given an indication to me that he will be ready to meet the obligation on Tuesday, March 9, 2021.

“Still within this meeting, in accordance with Article 179 of the Constitution, His Excellency has given further indication that he is prepared to lay the budget for the 2021 financial year on Friday, March 12, 2021, for consideration and approval,” he said.

Mr Bagbin reminded the House that there was a rather tall order of businesses to be handled prior to the end of the meeting of the current Parliament on March 31, 2021.

He, therefore, pleaded with the members of the House to cooperate fully with him and the leadership to accomplish the tasks ahead.

He announced the death of the Deputy Clerk to Parliament, Mr Robert Apodolla, whom he described as “one of the foundation members of the Parliament of the Fourth Republic of Ghana”.

“The Deputy Clerk of Parliament’s sudden death occurred during the period we were on a short break,” he said.

He said Mr Apodolla died after a short illness while on admission at the Korle Bu Teaching Hospital, and expressed the sympathy of Parliament to the family, leading the House to observe a minute’s silence in memory of the deceased.

Earlier, the Speaker recounted that the suspension of Parliament on February 9, 2021, following COVID-19 infections among 17 MPs and 151 staff of Parliament had allowed for the weekly disinfection and sanitisation of the Chamber and the premises of Parliament.

He stated that the third round of COVID-19 testing revealed that out of a total of 550 MPs and staff who retested, only 12 tested positive, with majority being auxiliary staff.

“It is my expectation that all honourable members and staff who are required to retest actually resubmit themselves for the retesting,” he stated.

He said the three-week break had enabled members and staff who tested positive to “overcome the virus”.

He, therefore, expressed optimism that both members and staff of Parliament would adhere to time-tested COVID-19 safety protocols.

“Let us wear our face masks religiously, wash our hands at the least opportunity while we are in the office; let our sanitiser be our companion wherever we find ourselves and let us maintain social distancing,” he said.

He assured the House and Ghanaians that Parliament would not merely adhere to safety protocols but would also adopt other protocols to ensure the safety of all members and staff in furtherance of the development of Ghana.

With the delivery of COVID-19 vaccines to Ghana, Mr Bagbin said he, in consultation with the leadership of the House, would soon announce a rollout of a vaccination plan for Members and staff of Parliament.

Presenting the business statement, the leader of the Majority group in Parliament, Mr Osei Kyei-Mensah-Bonsu, informed the House that the Minister designate for Health was scheduled to brief the House today on the COVID-19 situation in the country, including the ongoing vaccination exercise.