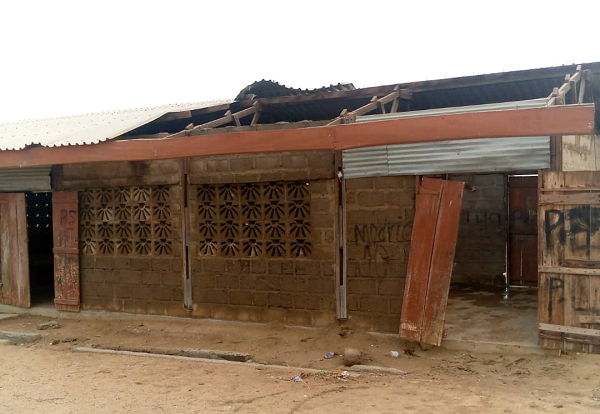 Eleven pupils of a primary school at Paga in the Upper East region on Monday sustained various injuries after a classroom block collapsed on them.

The classroom block collapsed at the Islamic and Arabic Primary School during a rainstorm in the Kassena Nankana West District.

The injured, four males and eight females, all primary three pupils, were in the classroom at the time of the incident.

Some of them suffered serious head injuries.

They were taken to the Paga District Hospital for treatment.

Many parents who got wind of the information rushed to the hospital to ascertain the state of their children.

The rainstorm which hit the entire Paga township around 2pm, destroyed some buildings, especially roofs.

The Headteacher of the school, Mr Addiyire Peter Ajegiwe told Graphic Online that all the pupils took refuge in their classrooms but unfortunately, the primary three classroom block collapsed on the pupils.

“The current state of the classroom block constructed so many years ago is a major threat to the lives of the occupants,” he noted.

He said some of the pupils who suffered minor injuries have since been treated and discharged with those whose injuries were critical are still on admission at the health facility, saying “those currently on admission are responding to treatment and will be discharged today [March 22, 2022]”.

He said several letters have been sent to the district assembly to draw attention to the dire state of the classroom block.

He stated that management of the school organised a 40th-anniversary ceremony to raise funds for renovation, but they could not raise enough to carry out the enterprise.