The President, Nana Addo Dankwa Akufo-Addo has touched down in Cote d'Ivoire on the final leg of a three-nation tour of neighbouring countries.

He was welcomed on his arrival Friday by Ivorian President Alassane Ouattara on his final stop after visits to Togo and Burkina Faso earlier in the week. 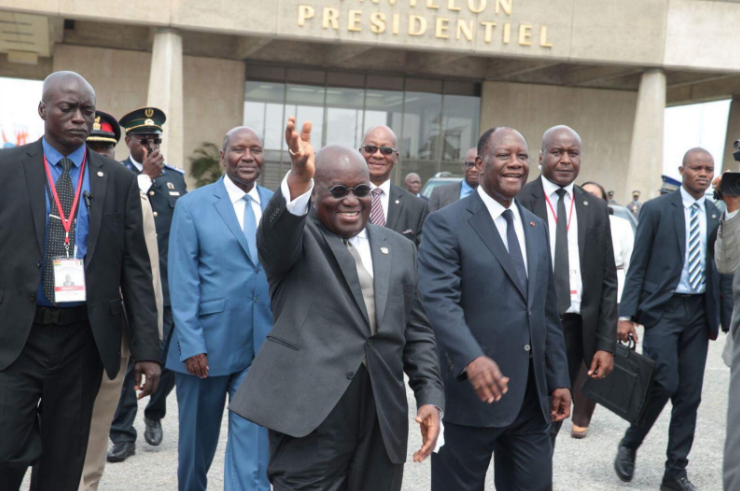 Topical among the issues to be discussed by the two leaders include illegal mining in Ghana which the Minister of Environment, Science and Innovation, Professor Frimpong Boateng said affects water bodies in Cote d'Ivoire during his a recent visit. 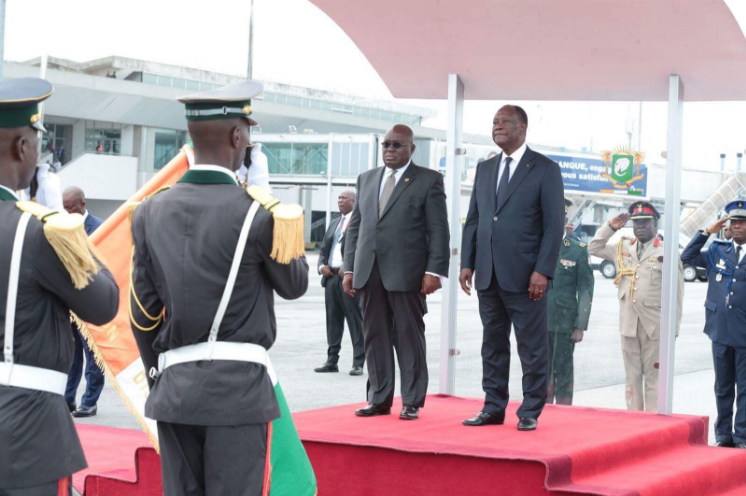 The visit will also enable President Akufo-Addo to explore and deepen bilateral relations between both countries.

The President is expected to return to Ghana on Sunday, May 7. 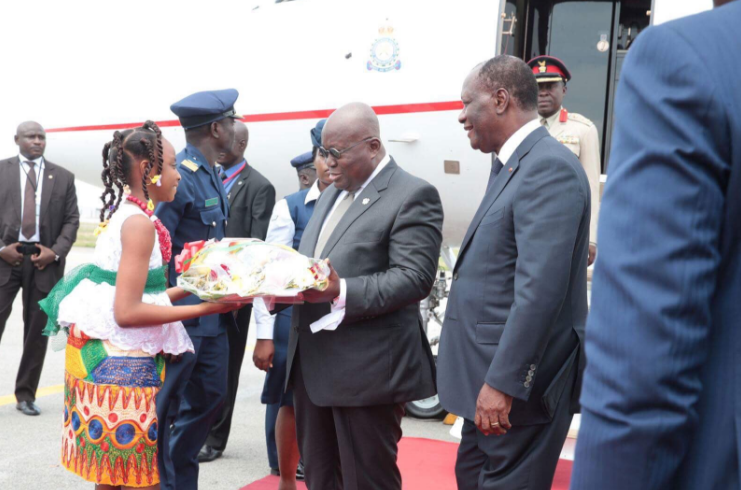 Early on Thursday (May 4, 2017), President Akufo-Addo visited Ouagadougou, the capital of Burkina Faso, with his agenda being “to develop the initiatives that will bring prosperity to our people.”

At a State Dinner held in his honour, and in responding to the remarks made by His Excellency Roch Marc Christian Kaboré, President of Burkina Faso, President Akufo-Addo indicated that the most important of these initiatives “are the regional projects in the area of infrastructure, and especially transportation.”

According to President Akufo-Addo, “it would be, for me, perhaps, the highlight of my presidency if, indeed, I was able, together with you (President Kaboré), to launch the beginning of the Accra-Ouagadougou railway project.” 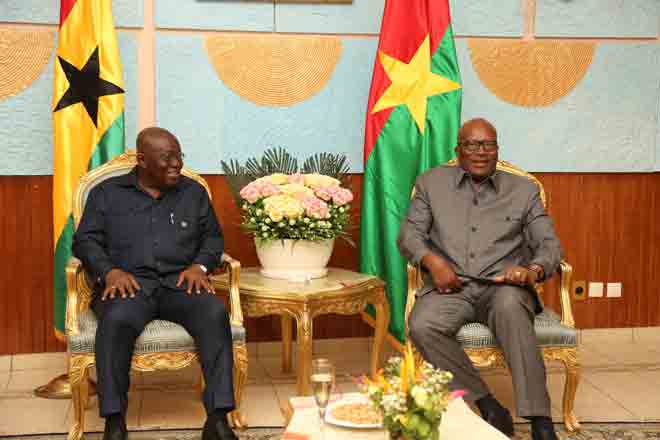 His commitment to this project, he told the Burkinabe leader, is evidenced by the fact that “right at the beginning of my government, I decided to establish a special Ministry for Railways Development in Ghana. In fact, the Minister himself is here to give testimony to the seriousness with which we look at this project.

“I would be very disappointed if the two sides are unable to find a solution to how we can get the Accra-Ouagadougou railway going”.

By the same measure, President Akufo-Addo stated that “the concern we have in Ghana, that you know about, is about the control of the water resources of our two countries”, adding that these “are matters that we are going to be able to address.”

The President was referring to the yearly opening of the Bagre Dam spillway, which causes flooding in the 3 Northern Regions of Ghana, resulting in the destruction of lives, farmlands, livestock, and property.

It is for this reason that the Minister for Sanitation and Water Resources, Hon. Kofi Adda, MP; the Minister for Works and Housing, Hon. Atta Akyea, MP, and the Minister for Agriculture, Hon. Dr. Owusu Afriyie Akoto, accompanied President Akufo-Addo on his visit to Burkina Faso to find lasting solutions, with their Burkinabe counterparts, to this phenomenon, by channeling the water spilled from the dam into productive ventures for the mutual benefit of the two countries. 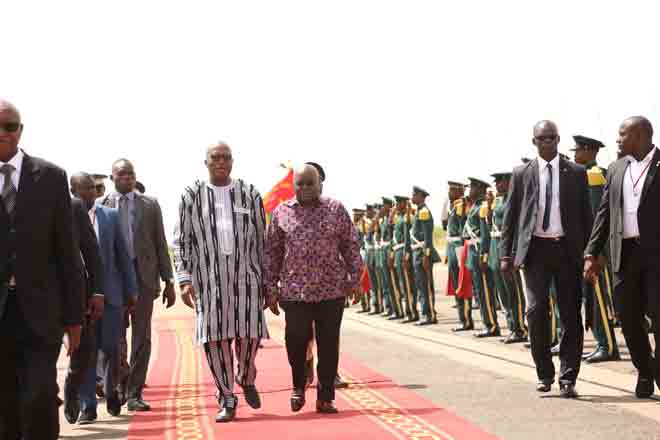 Africa must stand together

President Akufo-Addo noted that the new crop of African leaders have come into office at a critical time in the lives of the African peoples, where old alliances are having to be reshaped, and, therefore, implying that  Africa has to look for new sources and new areas of committing the development of the continent.

“The most important thing is to recognize the need for us to stand on our own two feet and resolve African problems with African resources and African personnel. We cannot and will not accept that other people can come and develop the continent of Africa for us. It will not happen, and the sooner all of us work together and recognize the necessity of collaborating on a platform that will lead to the prosperity of our peoples, the better,” he added.

Touching on the fight against terrorism, President Akufo-Addo assured President Kaboré that “in Nana Akufo-Addo and in his government, the people of Burkina Faso have a strong and steadfast friend.” 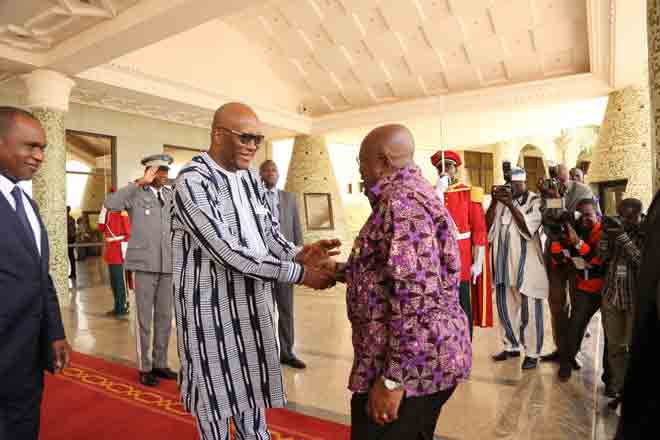 He expressed the appreciation of the peoples of West Africa for “the sacrifices the Burkinabe people, who are in the frontline of the fight against terrorism, are making to guarantee the peace and security not just of their own country, but the region as a whole.”

To this end, he reiterated Ghana’s commitment to “standing beside you in that fight and want you to know that whatever, within our modest means, we can do to promote the success of that struggle, you can count on us.”

With relations between the peoples of Ghana and Burkina Faso dating back to several centuries, President Akufo-Addo stressed that “even though there has been a change in direction and leadership in Ghana, our fundamental commitment to a close and sustaining relationship with the people of the Republic of Burkina Faso remains unchanged. Ghana continues to be by your side and continues to seek a relationship of intimacy and friendship.”