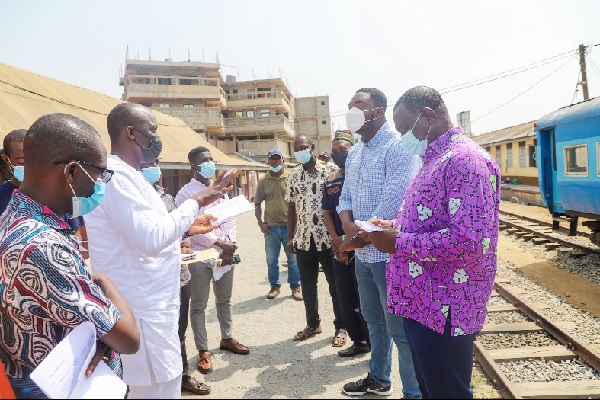 The Public Interest and Accountability Committee (PIAC) has urged the government to resolve all issues holding the Ghana Railway Company Limited (GRCL) from operating completed and rehabilitated railway lines, especially in Accra.

The Vice-Chairman of PIAC, Mr Nasir Alfa Mohammed, noted that the inability of the railway company to operationalise the completed railway lines would cost the state more money which could have been used for other development projects to maintain the lines.

“Although these projects are completed, they are not in operation and we think that is not helping at all because as we are not operating it at the moment, wear and tear is setting in. Very soon, we may have to redo some of these projects at a higher cost,” Mr Mohammed.

He made the observations last Friday during an inspection tour by a team from PIAC of some railway line projects in Accra financed with the Annual Budget Funding Amount (ABFA).

The visit formed part of PIAC’s monitoring exercise to verify the existence of the projects and whether value for money was obtained in the execution of the projects.

The tour took the team to the rehabilitation of the Accra Railway Station platform, the 41-kilometre Accra-Nsawam Sub-Urban Railway line (Narrow Gauge Single Track) and the construction and completion of the office complex for the Association of Regulatory Bodies at Ridge in Accra — the building which houses the headquarters of the Ministry of Health.

Again, Mr Mohammed said inspection works were being carried out to ascertain the integrity of the railway lines to bring it to safety operational standards.

For the 41-km Accra-Nsawam Sub-Urban Railway line, Mr Mohammed stated that out of the initial sum of about GH¢15 million for the project, records from the Ministry of Finance indicated that GH¢48.9 million was spent on the project, a figure which was almost thrice the original contact cost.

“Clearly, we think that, perhaps, there were delays which resulted in time overruns, cost overruns that may have accounted for this additional contract money,” he said.

Mr Mohammed added that the PIAC would follow up at the Ministry of Finance for further explanation and incorporate further findings in its report which would be made available in March next year.

The Chief Civil Engineer of the two rail projects, Mr Michael Addison, who briefed the PIAC team, explained that the engineers undertook works, including soil stabilisation, renewal of bolts and nuts to fasten the rails among others.

He added that upon completion of the projects, guards were frequently assigned to ensure the maintenance of the railway lines.

At the Association of Regulatory Bodies at Ridge, the Civil Engineer, Mr JoPeter Mbawine, explained that the initial project was re-engineered to accommodate the Ministry of Health headquarters at a cost of $27 million opposed to the $13 million original cost of the project.