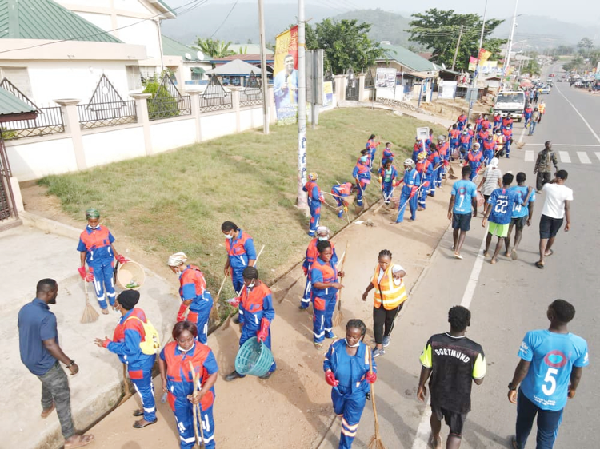 Volunteers cleaning a street in Kyebi during the exercise

The Okyenhene, Osagyefuo Amoatia Ofori Panin, and the Okyeman Environment Foundation (OEF), in collaboration with Zoomlion Ghana Limited, have organised a cleanup exercise at Kyebi in the Eastern Region.

The cleanup climaxed activities — including a health screening, church service and awards day — marking the 71st anniversary of the Okyenhene.

The exercise was also meant to improve the sanitation condition of the town and to encourage behavioural change among residents towards maintaining a more hygienic and sanitised environment.

Members of the OEF joined hands with workers of Zoomlion last Monday to desilt gutters and clear rubbish within the principal parts of the town.

After the exercise, Osagyefuo Ofori Panin stressed the importance of keeping a clean environment for good health, and urged the people to maintain proper sanitation habits.

He stated that the traditional council and the OEF would collaborate with the Abuakwa South Assembly to provide waste bins at vantage points “so that people can dump their waste wherever they find themselves”.

“Anybody found to litter the compound with rubbish would be arrested and fined because we cannot always have to leave the cleaning of our environment to Zoomlion. It should be our collective responsibility,” the Okyenhene stated.

Osagyefuo Ofori Panin called on residents to report to the Abuakwa Traditional Council if they found anybody indiscriminately cutting down trees or pouring hot water on trees.

“Trees have many benefits, including providing shade, clean air and environment, and we urge all residents to desist from cutting trees and rather plant them,” he said.

The Okyenhene said Kyebi had remained a clean city, and urged residents to help to maintain that status.
Osagyefuo Ofori Panin expressed appreciation to Zoomlion for the support and continuous collaboration with other assemblies to rid the country of filth.

The Executive Secretary of the OEF, Mr Kofi Gyimah Amoako, said the cleanup exercise would be maintained, adding that every household would be required to do a clean-up once a month, while Zoomlion would be in charge of collection.

He called on corporate bodies to partner OEF to carry out such exercises to help keep the town clean for good health and for tourism.

For his part, the Senior Corporate Affairs Officer of Zoomlion Ghana Limited, Mr Daniel Ohene Obeng, said the exercise was part of similar ones organised in other parts of the regions to draw the public’s attention to the worsening sanitation conditions.

He said the cleanup exercise would ensure free flow of water in the gutters to avoid flooding and to make sure that the environment was clean.

Mr Obeng called for the participation of all in making the Eastern Region cleaner and pleaded with the members of the community to embark on regular cleanup exercises to keep their environment clean and free from flooding.