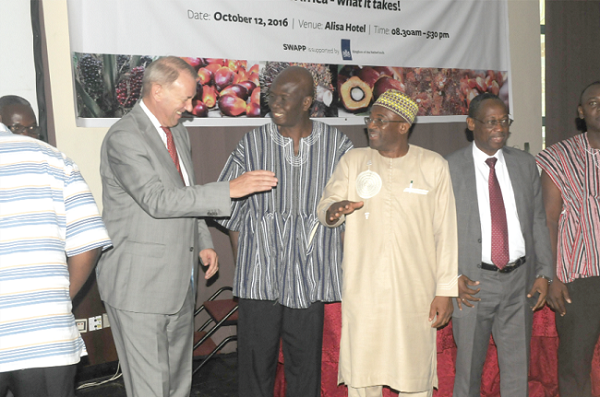 Some 2,000 oil palm farmers from Ghana, Cote d’Ivoire and Nigeria have benefited from a four-year programme aimed at enhancing their production and incomes.

Known as the Sustainable West African Oil Palm Programme (SWAPP), it provided the farmers with technical and financial support.

The SWAPP is an initiative of Solidaridad West Africa, an international non-governmental organisation (NGO), and funded by the Dutch government through The Netherlands Embassy in Ghana.

At a regional conference in Accra to close the programme, stakeholders, including experts in the oil palm sector in the three countries, called for a second phase of the project.

Sharing the successes chalked up under the project, Ms Suzan Hermina Yemidi, the country representative of SWAPP for Ghana, said the programme had improved the incomes and livelihoods of farmers and millers through increased farm productivity and efficiency of processing mills.

In Ghana, she said, some of the farmers in oil palm growing areas who benefited from the SWAPP increased their yields from 6.3 tonnes per hectare per year to 16.6 tonnes per hectare annually, saying “we have almost tripled the yield on well-managed farms”.

For oil palm millers who were assisted to acquire new and modern milling machines, Ms Yemidi said they moved from nine per cent extracting rate to more than 12 per cent of extracting high quality oil palm.

A Deputy Minister of Food and Agriculture, Dr Ahmed Yakubu Alhassan, said though oil palm was the second most important tree crop in Ghana, the country was producing less of the crop than it consumed.

He said assisting oil palm farmers on how to improve upon their farms for maximum profitability through financial and technical support would help provide jobs, improve local economies and reduce rural poverty.

Currently, he said, Africa produced about five per cent of global output of palm oil but consumed at least 10 per cent.

He said small growers and artisanal millers, who contributed about 80 per cent of Africa’s total annual output, must be repositioned to play their roles in a more sustainable manner.

The deputy minister enumerated some challenges faced by small-holder farmers as low knowledge on best farming practices and lack of access to finance and urged the financial sector to develop products that would assist the agricultural sector to grow.

He said the support from the financial sector must not be financial alone but also include monitoring and coaching, as well as the provision of expert advice from dedicated agricultural desks set up by the financial institutions.

Dr Alhassan said the ministry was collaborating with the Ministry of Trade and Industry and the Attorney-General’s Department to set up an Oil Palm Development Board to regulate the sector.

In his remarks, The Netherlands Ambassador to Ghana, Mr Ron Strikker, said the Dutch government was ready to invest in the second phase of SWAPP to scale up the achievement of the first phase.

He said in line with his country’s shift from aid to trade, the Dutch government was working in some selective areas of strategic value, including the cocoa, palm oil, horticulture, aquaculture and poultry sectors.

“We are proud of the achievement of the SWAPP and we are proud to have been part of this programme so far,” he said.

The Minister of Agriculture and Food Security of Cote d’Ivoire, Mr Koussi Bredoumy Soumaila Traore, who led the Ivorian delegation to the conference, said the Ivorian government was committed to the sustainable development of oil palm production because the crop held great potential to support the sustainable economic development of farmers in the country and Africa at large.

He said the implementation of the second phase of  SWAPP would help not only to promote the idea that oil palm was profitable but also encourage farmers to intensify the cultivation of oil palm as a means of diversification from traditional exports.