Obuasi Mine bounces back as AngloGold Ashanti pours first gold 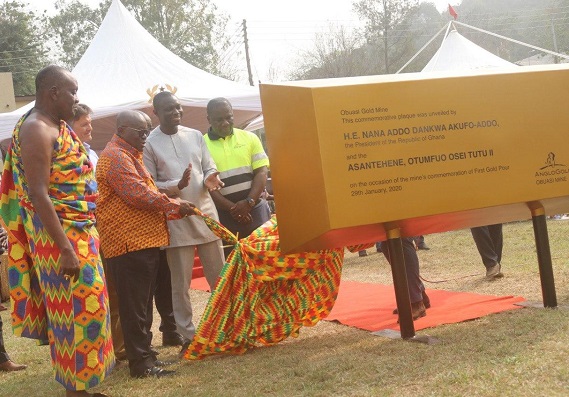 President Nana Addo Dankwa Akufo-Addo being assisted by Mr Francis Kwaku Kwarteng, the MP for Obuasi West, to unveil a plaque to commemorate the first Gold Pour of AngloGold Ashanti in Obuasi in the Ashanti Region Follow @Graphicgh

The last four years saw the country’s flagship mine, which had been in operation for more than 100 years, placed under “care and maintenance”, in the face of its long held potential to uplift the local economy.

About 550 people, majority of them Ghanaians, have so far been employed, bringing the total number of people so far employed by AngloGold Ashanti and its contractors to 3,500 as of January this year.

Speaking at a colourful ceremony at the Cricket Oval of the Obuasi Mine yesterday, President Nana Addo Dankwa Akufo-Addo said the day was a very happy one for him and all Ghanaians, especially residents of Obuasi.

A year ago, he said, “I was here to launch the Obuasi Mine redevelopment project whose aim was to signal a return to operation of the world-famous Obuasi Mine, which had effectively been closed since 2014. The shutdown of the mine brought in its wake some severe levels of hardships to communities whose major preoccupation is mining.”

He said employees, both direct and indirect, felt the brunt of the closure, with equally devastating effects on many actors along the value chain, including mine support service companies, security companies, telecommunication providers and financial institutions.

The President said in fulfilment of a 2016 pledge to the people of Obuasi, “my assumption of office saw the holding of a series of negotiations and discussions and the provision of a number of fiscal incentives which led, first, to the establishment of the redevelopment project of the Obuasi Mine and brought us to this day when we effect a ceremonial celebration of the first gold pour of the mine, which actually took place on December 18, 2019”.

“You can understand my excitement as we mark the return to production, productivity and profitability of the mine and alert the rest of the world to new beginnings for Obuasi,” he said, adding that it would help in spurring the development of the country.

He explained that the vision of the project was to deliver a mechanised underground mine that would enable AngloGold to mine 30 million tonnes of ore in the next two decades.

The mine, he added, undertook its first blast underground in February last year and started with 2,000 tonnes a day, which it would be scaling up to 4,000 tonnes a day by the end of the year and thereby produce an average of 35,000 tonnes of gold per annum in the first 10 years.

“I expect the first gold pour to mark the year of return to winning ways, not only for Obuasi but also the mining sector in Ghana as a whole,” President Akufo-Addo stated.

He said he would be counting on the mine to pull the adjoining communities out of poverty and enable them to reflect the wealth that their soil had generated.

He added that the government would work with AngloGold to ensure that all environmental concerns, among others, were satisfactorily addressed.

The Juabenhene, Nana Otuo Siriboe II, who represented the Asantehene, Otumfuo Osei Tutu II, expressed Otumfuo’s gratitude to the government for the revamping of the mine.

Describing it as one of the Asantehene’s greatest satisfactions, the Juabenhene conveyed his commendation to the government for spearheading the project and ensuring that the Obuasi Mine was back to life.

The Minister of Lands and Natural Resources, Mr Kwaku Asomah-Cheremeh, said in spite of the numerous challenges that confronted the Obuasi Mine, which at some point led to its total shutdown, many others did not give up but did their best to see the mine resuscitated.

“Today, after rigorous studies for both technical and economic feasibility, the mine has been granted a new lease of life," he stated.

He said with the restart of operations, most of the employees, about 2,500, would be Ghanaians and mostly people from Obuasi and surrounding communities.

He described the revamping of the mine as another mark of the positive outcome from collaboration among stakeholders.

The achievement marked the completion of the first phase of redevelopment, in line with the plan to create a modern and mechanised mine.

The Obuasi Mine will enter the second phase of development this year, where the construction of new infrastructure and further work on the processing plant and underground will be carried out.

“The commemoration of the first gold pour is a significant achievement for the company, Obuasi, the communities around the mine and Ghana. The work to revive this historic operation shows the importance of teamwork, partnership, commitment and the enduring power of shared values,” the Chief Executive Officer of AngloGold Ashanti, Mr Kelvin Dushnisky, said.

Obuasi, which is primarily an underground operation, was placed on care and maintenance in 2017, pending the commencement of the redevelopment project in June 2018.

Gold production had been declining almost continuously at the mine since 1995, principally due to underground challenges and development and backfill constraints.

The ceremony yesterday to celebrate the first gold pour attracted traditional rulers, host communities of the mining company and staff of AngloGold Ashanti.