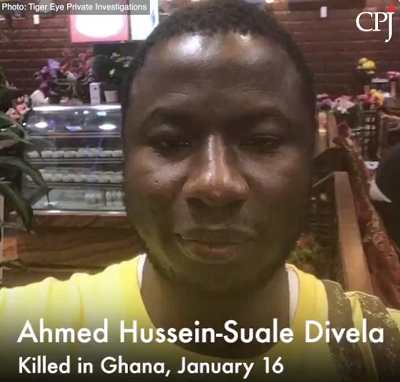 CPJ is still investigating the deaths of 25 other journalists worldwide to determine whether journalism was the motive. This year's figures cover January 1 to December 13, 2019, and compare with 56 journalists killed with a confirmed motive in all of 2018.

Here are their stories. THREAD ⬇️

The drop in murders comes amid unprecedented global attention on the issue of impunity in the killing of journalists, due largely to three recent cases that continue to reverberate. On October 16, 2017, the press in the European Union was dismayed when a car bomb killed a prominent anti-corruption blogger, Daphne Caruana Galizia, in Malta. Less than six months later, a second EU murder occurred with the shooting death in Slovakia of Ján Kuciak and his fiancée in their home; Kuciak had been reporting on the Italian mafia and alleged embezzlement of EU funds. Later in 2018, the murder and dismemberment of exiled Saudi journalist Jamal Khashoggi in the Saudi Arabian consulate in Istanbul made headlines around the world.

It is impossible to know whether the high-profile nature of these murders and their consequences has deterred any would-be killers. CPJ has for several years documented a decline in the murders of journalists and a rise in self-censorship in traditionally dangerous places like Pakistan and Russia, where the lack of justice for past crimes has intimidated some away from critical reporting. Furthermore, those who wish to threaten the press have many tools besides murder at their disposal. The number of journalists imprisoned globally has remained at least 250 for four consecutive years, while journalists from Hong Kong to Miami have been subject to legal harassment, hacking, surveillance, and smear campaigns, CPJ research shows.

One place where efforts to combat impunity seemingly have had no effect is Mexico. At least five journalists there were killed in reprisal for their work in 2019, compared with four last year and six in 2017. CPJ is investigating another six killings in Mexico this year to determine if journalism was the motive. At least two of the journalists murdered this year because of their work had sought protection under Mexico’s Federal Mechanism for the Protection of Human Rights Defenders and Journalists, a program that was held up as a regional example for press freedom when it was created in 2012 but that has been chronically underfunded, understaffed, and ineffective. In November, President Andrés Manuel López Obrador told a press conference that the institution would be given “unlimited resources” and would commit to a list of recommendations made by the local office of the U.N. High Commissioner for Human Rights. Still, it is difficult to feel optimistic in an environment where murder investigations are deeply flawed and where newspapers feel the need to announce they will curb sensitive reporting for the safety of their staff.

Mexico was this year’s second deadliest country after Syria, where at least seven journalists were killed. Three of them were killed by Turkish airstrikes in mid-October, when Ankara’s forces advanced into Syrian territory to push the U.S.-allied, Kurdish-led fighters back from the border, after President Donald Trump ordered a U.S. withdrawal from the area. On October 11, a Turkish airstrike killed Kurdish Turkish documentary filmmaker Vedat Erdemci as he filmed the warplanes flying over his home. On October 13, a Turkish airstrike on a civilian convoy, which included local and international journalists, killed Syrian Kurdish reporter Saad Ahmed and injured Syrian Kurdish reporter and cameraman Mohammed Hussein Rasho, who died the next day.

Deaths in Syria, where at least 134 journalists have been killed in the war, have declined since 2012. Therese Pettersson, research coordinator at the Uppsala Conflict Data Program at Uppsala University, Sweden, told CPJ in an email that preliminary data from 2019 shows that all civilian deaths in Syria fell sharply in 2019 compared with the previous year. Across the war-torn Middle East, journalists' deaths in conflict and crossfire fell this year from last year, in line with the shrinking breadth of battle and waning global interest in the plight of countries like Libya and Yemen. The eight journalists CPJ recorded as killed in conflict or crossfire was the lowest number since 2011, before some of the peaceful uprisings of the Arab Spring turned to civil wars. The high death toll over that period led CPJ and other press freedom and journalist safety organizations to form a coalition promoting better security, especially for freelancers.

Pettersson said that civilian casualties in Afghanistan, in contrast, remained at the same level this year as in 2018, according to preliminary data. The country was the most deadly in the world for journalists in 2018, in large part because of a double suicide attack claimed by the militant group Islamic State that killed nine journalists who had come to report on the first blast. CPJ did not record any journalists killed in the line of duty in Afghanistan in 2019. A manager of a large news operation that lost two reporters last year told CPJ that news bureaus in Afghanistan have become more cautious, with fewer journalists rushing to cover explosions.

The nature of the double suicide attack last year, in which the assailant disguised himself as a journalist and detonated his explosives in a group of reporters, led CPJ to classify the Afghanistan killings as murders, contributing to a spike in what had otherwise been a global downward trend since 2015.

In the three murders since 2017 that have captured unusual attention, nobody has been convicted in any of the crimes, but they have hardly been without repercussion. In immediate response to Kuciak's murder, tens of thousands of Slovak protesters took to the streets, leading to the eventual resignation of Prime Minister Robert Fico, the interior minister, and the police chief. Prosecutors in March this year charged the alleged mastermind, businessman Marián Kočner, who has denied involvement. In October, prosecutors announced indictments against three others. Also in March this year, the country elected its first female president on an anti-corruption, pro-press platform, though Fico's party continues to dominate parliament, at least until elections next year.

In Malta, Caruana Galizia's three sons have campaigned without let-up for an independent inquiry and justice. After two years of obfuscation and delay by the government of Prime Minister Joseph Muscat, of whom the blogger was a harsh critic, a dizzying series of events related to the case in the past month appear to be shifting Malta's political landscape. Following the arrests of an alleged middleman and a businessman, the tourism minister and Muscat's chief of staff resigned and the economy minister announced his own suspension, according to news reports. On December 1, Muscat announced he would step down from the premiership in January, but he is under pressure to resign sooner.

Khashoggi's murder appears unlikely to shake the Saudi leadership -- not least because of President Trump's continuing support -- even though American intelligence agencies and a U.N. special rapporteur have found Saudi Crown Prince Mohammed bin Salman ultimately responsible. Nonetheless, the brutal murder that touched on three countries (Khashoggi was a U.S. resident) and that took place in a building meant as a place of refuge for its country's citizens severely curbed the crown prince's global credibility. It strained the Gulf kingdom's international ties and was cited by some news reports as one of several reasons that a long-awaited public listing of Saudi state oil company Aramco took place this month on a local rather than international stock exchange.

Other findings from CPJ’s research include:

CPJ began compiling detailed records on all journalist deaths in 1992. CPJ staff members independently investigate and verify the circumstances behind each death. CPJ considers a case work-related only when its staff is reasonably certain that a journalist was killed in direct reprisal for his or her work; in combat-related crossfire; or while carrying out a dangerous assignment such as covering a protest that turns violent.

If the motives in a killing are unclear, but it is possible that a journalist died in relation to his or her work, CPJ classifies the case as “unconfirmed” and continues to investigate.

CPJ’s list does not include journalists who died of illness or were killed in car or plane accidents unless the crash was caused by hostile action. Other press organizations using different criteria cite different numbers of deaths.

Elana Beiser is editorial director of the Committee to Protect Journalists. She previously worked as an editor for Dow Jones Newswires and The Wall Street Journal in New York, London, Brussels, Singapore, and Hong Kong.