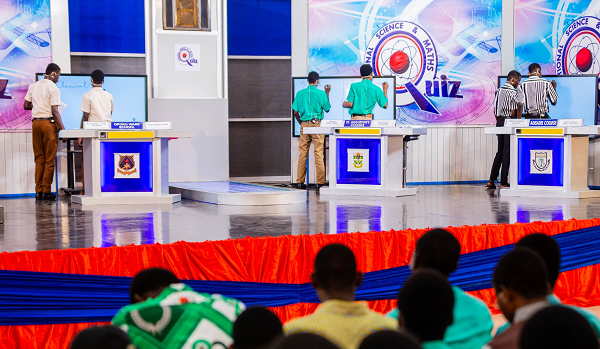 This year’s final of the National Science and Maths Quiz (NSMQ) will be a battle of former champions as five-time champions Prempeh College; Presbyterian Boys Senior High School, Legon, who have won six times, and one-time champions, Adisadel College, have qualified for the showdown on Wednesday.

Yesterday, in their respective semi-final contests of the competition taking place at the Kwame Nkrumah University of Science and Technology (KNUST), the three finalists ensured that their dream of establishing their credentials as the best remained on course in fascinating styles.

With Prempeh and PRESEC’s qualification, Wednesday’s final will be a repetition of the 2021 final where these two schools and Keta SHS competed for the title.

This year, Adisadel College completes the trio to relive the 2017 final against Prempeh and this time, they will be hoping to end the dominance of the two schools who together have won 12 of the contests since its inception in 1994.

Reigning champions, Prempeh College, were the first to book their place, shrugging a close challenge from Abetifi SHS and Mfantsipim School.


The contest was so close that only three points made the difference for Prempeh who sailed through with 43 points as against 40 for Abetifi and Mfantsipim, which managed 38 points.

Second to qualify was PRESEC who had a comparatively easy contest, winning by 51 points against St James Seminary’s 35 points and Kumasi High’s eight points.

In what was described as the finals before the final, the contest between St Augustine’s college, Adisadel College and Opoku Ware was chilling as each of the competing schools had made great strides in the competition.

From the beginning, it looked like it was one that Opoku Ware would win, having started on a very good note ahead of the others. However, they were let down in particularly, Round Four, which was considered their strongest area, allowing Adisadel, champions in 2016, to take over.

Once they got into the commanding lead, they never looked back and ended the contest with 45 points, leaving Opoku Ware in second place with 33 points and St Augustine’s third on 22 points.

The 2022 NSMQ has been nothing short of its thrilling and nerve-racking competitive rounds with some surprising outcomes.

The grand-finale promises to be a thrilling encounter as defending champions and five-time winners Prempeh College is looking forward to grabbing their sixth title while six-time winners, the Odade3 boys, are also looking to snatch their seventh.

This will also be a revenge or repetition affair as the three finalists have met in the final at one time or the other.

Between Prempeh and PRESEC, this year will be their third final clash— in 1996 and 2021.

On the other hand, it will be the second time between Prempeh and Adisadel, the first being in 2017 which Prempeh won too.

Chasing a seventh NSMQ title, PRESEC Legon have coined their mantra “ We are ‘seven’ a living God. Disappointingly for them, their attempts in the last two editions did not go as planned. Having made it to the final for the second consecutive time, the PRESEC team insist, their mission remains unchanged.

“Our winning is not a fluke, we are still serving a living God and he will lead us to win to the seventh title we are chasing,” the NSMQ coordinator for PRESEC, Dziedefo Afram, said in a post-event interview.

For Prempeh, the target is to upgrade to sixth heaven and they seem to be on course with another final berth.

The NSMQ coordinator for Prempeh College, P.K Damoah, said the journey to the finals this year had not been easy as it required a lot of dedication from both students and teachers; nonetheless, they have remained focused and achieving their targets at each stage of the competition.

“It is easy to win, but not that easy to retain the title. It has not been that easy this year, but at each stage, the target was to progress which we have done all the way to the final.

“We are coming with full force as we have not come to play,” he said.

This will be only the third time that PRESEC and Prempeh are clashing in the final. The first in 1996 and that epoch final last year.

In that first clash in 1996, Prempeh College won the competition with 81 points while PRESEC had 77 points. Last year, Prempeh won again with 53 points against PRESEC’s 49 points and Ketasco’s 30 points.

Wednesday’s final will be Adisadel’s third – consecutively in 2016 and 2017 and now. While they won their maiden title in 2016, they failed to retain the title the following year, but that did not make as much news as the handbag of the NSMQ Mistress that went missing during a melee after the end of the contest.

The Santaclausians would rather not be remembered for that embarrassing incident as they have resolved to redeem their image.

“The fact that within seven years, we have been in the final three times is indicative of quality. We are back in the final to claim our second title and that remains our focus,” one of the lead persons of the Adisadel team said in an interview.

The National Science and Maths Quiz was established in 1993 but the competition started in 1994 with Prempeh College becoming the first school to win it.

In 2016, Adisadel College won the title for the first time.