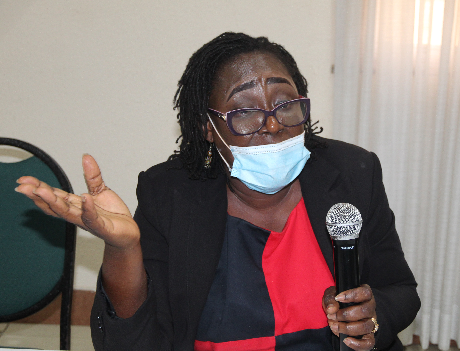 Mrs May Obiri-Yeboah, Executive Director of the NRSA
30.5k Shares

The National Road Safety Authority (NRSA) has advocated that two drivers be allocated to vehicles which travel long distances of more than eight hours or 500 miles.

“It is not appropriate for one driver to drive that long,” the Executive Director of the NRSA, Mrs. May Obiri-Yeboah, said.

According to her, many road crashes could be attributed to stress suffered by drivers as a result of the fact that they seldom took time off to rest during such long journeys.

Mrs. Obiri-Yeboah made the advocacy at a workshop to sensitise drivers and pedestrians to safety measures to help reduce the carnage on our roads in Kumasi yesterday.

It was on the theme: “Ensuring safety, protecting lives.”

She said her outfit would ensure that transport unions bought into the idea of deploying two drivers to a vehicle, emphasising that driver fatigue contributed to the increasing spate of accidents on roads in the country.

“The authority will ensure that officers are trained as inspectors and stationed at various lorry terminals to ensure that only road worthy vehicles are allowed to ply the roads.

“There will also be a log book to determine whether a vehicle is going on a long journey or not,” she said.

Mrs. Obiri-Yeboah also mentioned drink-driving, wrongful overtaking and speeding as some of the major contributory factors to road accidents and advised drivers to adhere to basic road safety practices on the roads.

The Head of Public Relations and Education at the NRSA, Mr. Kwame Atuahene Koduah, said absolute road safety was a shared responsibility and called on all to play their roles effectively to ensure safety on the roads at all times.

He said the authority had outlined a number of programmes, such as media engagement, road safety education, sensitisation, outreach programmes and school visitations, to educate pupils and students of road safety.

A driver at the VIP Terminal at Asafo in Kumasi, Mr. Francis Asamoah, on behalf of his colleagues, commended the authority for the workshop, which he said was an educative exercise and entreated the NRSA to organise such engagements at lorry terminals regularly.

He urged the city authorities to fix non-functioning traffic lights, improve on the poor lighting systems in cities and towns and also fix potholes to help reduce the road carnage.