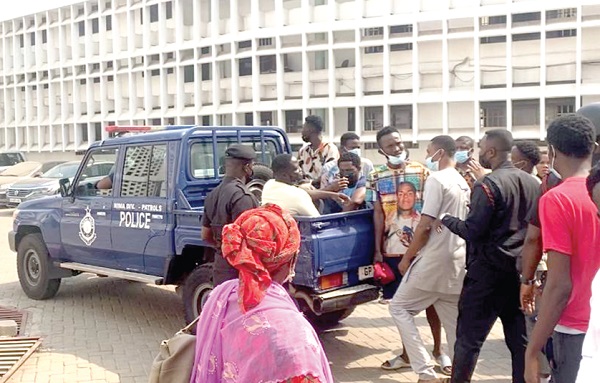 One of the lead suspects in the rivalry groups behind last January's violent clashes at Nima-Mamobi in Accra, has been granted bail by an Accra Circuit Court.

Ibrahim Hussain, aka Kumodzi – the leader of the “Kumodzi group’, was admitted to bail with three other suspects, Farouk Dawda aka Omoni, Aziz Suleman and Zakari Mohammed aka Miller, who are all linked to the case.

The four were admitted to bail in the sum of GH¢80,000 each with two sureties each.

This was when their case came for hearing at the court presided over by Rosemary Baah Tosu on Tuesday (Feb 15, 2022).

They pleaded not guilty to the charge of conspiracy to riot with weapons, rioting with weapons and causing harm to two persons, Frimpong Boateng and Shaibu Abdul Razak.

As part of the bail conditions, they are to report to the Nima police twice every week.

Meanwhile the leader of the ‘Bombom group’, led by Ali Awudi, alias Bomba is still on the run.

The suspects were charged with conspiracy to riot with weapons, rioting with weapons and causing harm to two persons, Frimpong Boateng and Shaibu Abdul Razak, who are said to be receiving treatment.

The accused persons are to re-appear on March 9, this year.

At about 3 pm on January 18, 2022, the police received information that there was a riot at Nima Gutter where firearms and other offensive weapons were used.

A video of the incident that went viral should there was sporadic shooting on the streets of Nima as some young men wielding guns and other weapons, such as machetes and clubs, from either group attempted to overpower each other.

Preliminary police investigations indicated that the violent disturbance was occasioned by a misunderstanding between the two gangster groups, namely, the ‘Bombom group’ and the ‘Kumodzi group’ based at Mamobi and Nima Gutter, respectively.

A total of 12 spent shells were retrieved from the scene and a barbering shop located few metres away was also vandalised by the rioters.

A search in the vandalised shop led to the discovery of three AAA live ammunition, one empty pistol magazine, one live pistol bullet, a knife and a machete.

A 53-year-old man who was about to move his car from the scene, was hit by a bullet on his left shoulder and was currently responding to treatment at the Emergency Ward of the 37 Military Hospital.

Two of the suspects identified as Suleman and Moro, who had gone to seek treatment at the Greater Accra Regional Hospital, Ridge, were picked up and were on admission under heavy police guard at the Police Hospital where they were treated and discharged.

Three others Gariba, Barinu and Ganiru were also arrested at the Greater Accra Regional Hospital, Ridge, after they were identified by the police.

Intelligence also led to the arrest of suspects Salim and Seidu at their hideout in Ashalajah, Accra and a military uniform and pump action gun were retrieved from them.

On January 23 this year, Dawda was arrested from his hideout at Polo Park near Kotoka Airport following intelligence from the police.