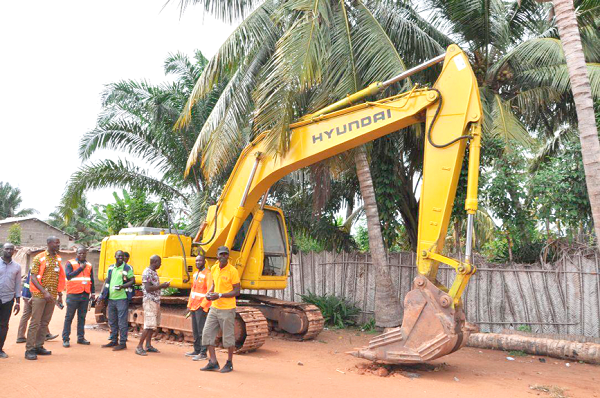 Some local residents and officials of EPA by an abandoned excavator
30.5k Shares

Some citizens at Dzelukope in Keta have vowed to fiercely resist the activities of illegal sand winners in the area who are carrying out their nefarious activities at night with impunity.

“We will do so even at our peril,” said a spokesperson for Torgbi Dzelu IV, John Jingo Amenakpor, Dufia of Dzelukope.

He told officials of the Environmental Protection Agency (EPA) last Tuesday that although illegal sand wining had been taking place in Keta for many years, the trend in recent times was scary and posed a threat to Keta which was already below sea level.

He said in the past two months, the sand winners had been operating with heavy equipment with impunity between midnight and 4a.m., damaging the Gobah beach woefully and depriving the fishermen of their livelihood.

Mr Amenakpor alleged that there were wealthy individuals and companies behind the nocturnal trade.

According to him, some local residents were conniving with the criminals for paltry gains.

The EPA team, led by the Regional Director, Hope Smith Lomotey visited the Gobah Beach following reports of illegal sand winning activities at night by the individuals who have also put up a camp at the beach for their machines.

The team found an abandoned excavator at the beach and two heavy-duty tipper trucks, which according to one of the citizens of the area, belonged to the sand winning gang.

The team also found a fence at the beach said to be erected by the sand winners as part of their camp project.

Mr Amenakpor said as a result of the dreadful operations by the sand winners at night, wide and deep depressions had been created on the ocean bed at the beach at Dzelukope and that was now preventing the fishermen to pull their nets off-shore smoothly.

“Dzelukope alone has about 5,000 inhabitants and fishing is invariably our livelihood, so anyone or group of people who destroy our sea shore will suffer swift and ruthless consequences,” he further cautioned.

An elder of the area, Eddie Ashiagbor expressed similar sentiments and said the citizens would keep watch all night long and work hand in hand with the EPA to arrest the illegal sand winners.

Later, during a meeting with the EPA team, the Keta Municipal Chief Executive, Emmanuel Gemega said the assembly was taking drastic measures to deal with the sand winners who were operating at a time when the assembly was rather looking into possible ways of retrieving land from the sea.

He said a Ghanaian company, was recently contracted for that feasibility study which was still at the initial stage.

“Then, last week to our surprise, we saw earth-moving machines of the company at the beach without any prior community engagement or our knowledge; and subsequently, we sent them packing,” he told the EPA team.

In response, Mr Lomotey made it clear that no sand winning activity could take place anywhere without a permit from the EPA.

He entreated the Keta Municipal Assembly to form its own anti-sand winning task force as well to deal with the menace.