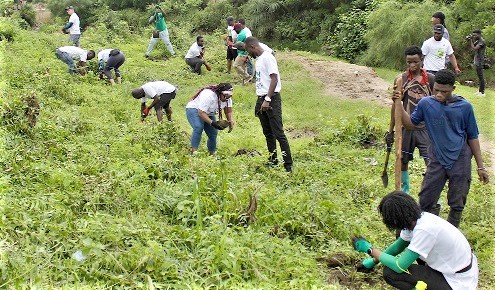 Green Diversity Foundation Africa (GDF), a non-governmental organisation, has called on society to protect water bodies as it joined the local celebration of World Environmental Day.

World Environment Day is celebrated annually on June 5 by the United Nations to encourage worldwide awareness and action for the protection of the environment.

The Ghana event, held at the Shikabu Lake at Ogbojo in Accra on the eve of the global celebration, was geared at restoring the watershed ecology of the lake and other selected lakes in the region to conserve the environment.

In partnership with Tullow Oil, the Environmental Protection Agency (EPA), Rigworld Group, Kosmos Energy, Baker Hughes, Maersk Drilling and other stakeholders, the event was commemorated on the global theme: “Only One Earth”.

As part of activities to restore the watershed ecology of the Shikabu Lake, the group and its partners planted 170 trees, which included bamboo, mahogany, tree of life, and acacia, around the lake.

The group and its stakeholders planned to plant 1,000 trees at other lakes and lagoons in Accra by last week Friday.

Co-Founder of GDF, Hobson Agyapong, stated that the initiative was an annual event to protect the environment and address the current needs of climate change, global warming, filth, and flooding, among other global environmental issues.

He explained that the Shikabu Lake had initially hosted most cattle in the community, and served as a source of irrigation and other agricultural purposes, but had been turned into a dumping site by residents of the community, hence the initiative to restore it to protect the environment.

Mr Agyapong, who is also the Senior Programmes Officer of the EPA, disclosed that a five-year project was underway to restore the ecology of the lake and make it a green area with a garden for recreational activities for the community.

He said the youth in the community would be taught to nurture plants, seedlings and to propagate them as part of the watershed ecology restoration project to provide employment.

“So the idea is to identify all the lagoons and lakes around and restore them into a for people and the community to enjoy, and we are keeping all these places as a watershed where when it rains we will create an environment for the water to have, at least, a transition point and then fairly distribute itself into our drains that we have constructed,” he added.

The Chairman of GDF, John A. Pwamang, said recent happenings in in the communities such as floods and rain patterns were a warning to change and improve on attitudes to ensure that the environment was protected.

Mr Pwamang, who is also the immediate past executive director of the EPA, said the plan to conserve the lake was necessary as people were trying to encroach on the land around and directly in the lake.

He called on the residents and stakeholders to embrace the change as their contribution to the protection of the environment.

The Environmental Advisor of Tullow Oil, Mary Daisie Gyenfie, commended GDF for liaising with stakeholders to establish water bodies that were drying up in urban areas and for the restoration of ecological zones.

She expressed the hope that the trees that were planted would be kept and nurtured so that they would protect the environment.

Ms Gyenfie called on the public to continually protect the earth and to do their part to ensure that the environment was not lost as a result of unhealthy practices.