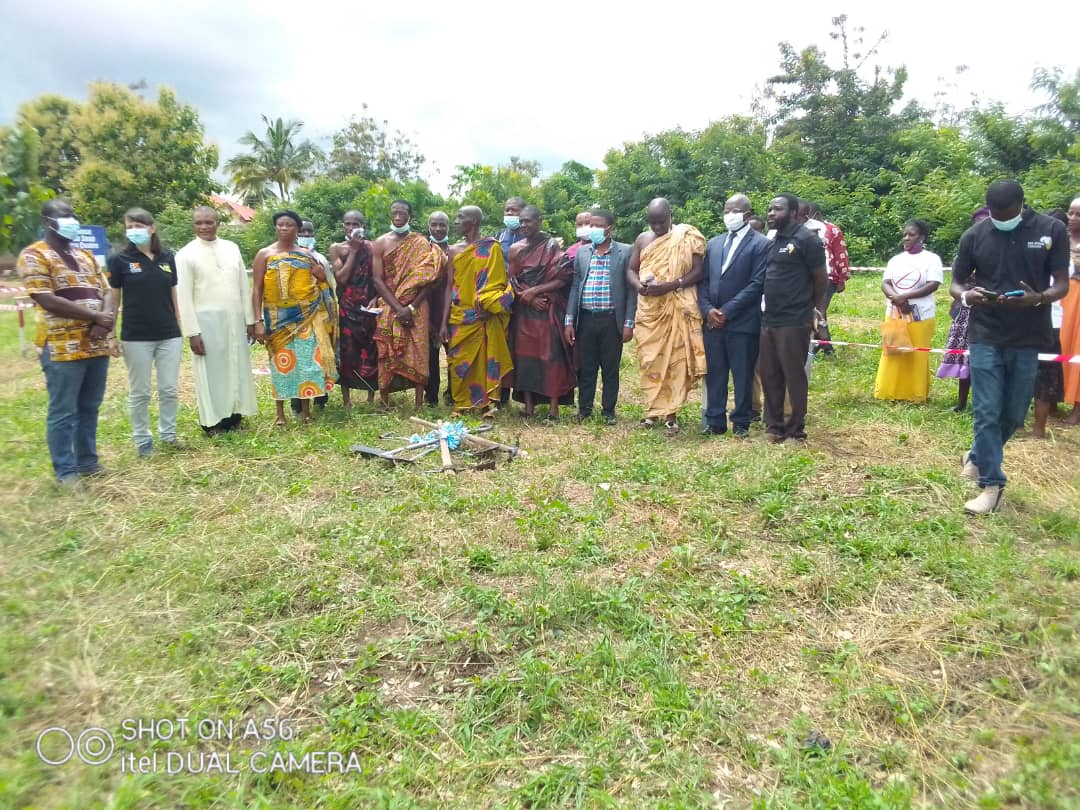 Officials of VIS Ghana, BOK Africa Concern, Chiefs of Senase and Berekum at the site for the soap factory warehouse Follow @Graphicgh

The sod has been cut for the construction of a GH₵500,000 soap production warehouse at the Nana Owusu Fakyiwaa Soap Resource Centre at Senase in the Berekum East Municipality of the Bono Region.

The project when completed, will be used as a storage facility for various detergents and see young women in the community been trained in soap making.

Ms. Silvia Tizzi, the project manager of Volontariato International Per Lo Sviluppo (VIS) Ghana, a non-governmental organisation (NGO), whose outfit is facilitating the project, urged communities outside urban centres to prioritise issues concerning gender empowerment and the vulnerable to drive progress and development in their communities.

Grant and Catholic Bishops support
The project which started with a mini-grant of Gh₵145,000 was financed by the Italian Catholic Bishops’ Conference and jointly implemented by VIS Ghana and BOK Africa Concern, a Berekum-based NGO. It also had the support of the Salesians of Don Bosco AFW and the Catholic Dioceses of Sunyani and Techiman.

Objective
The objective is to promote local economic development using gender empowerment to mitigate irregular migration by raising awareness in schools, on radio and through community events of the risks associated with irregular migration.

Ms Silvia Tizzi, the Project Manager of VIS Ghana, said research had shown if women did not fully participate in development and decision-making process, it affected improvement in areas such as health, education and protection.

“Hence this project seeks to support economically and financially disadvantaged women for enhanced livelihoods,” she added.

She further explained that the project aimed to create new opportunities for the youth and vulnerable groups by giving them training in models like soap production, training in organic agriculture and the provision of access to financial tools such as mini-grants and micro-credit schemes with funding for community borehole projects and women cooperative groups.

"The project will be supported by fixing two main challenges to strengthen the skills of the cooperatives for an effective functioning of its workers concerning administrative work, promote good marketing and brand promotion at the local and national levels", she added.

Background
Giving a brief background to the project, Mr Benson Osei-Savio Boateng, executive director of BOK Africa Concern, a Berekum based non-governmental organisation(NGO), said in 2015, the Don Bosco headquarters in Rome, Italy, realising the data on the alarming death toll on irregular migrants in the country, decided to launch a rescue mission to save and prevent others from becoming victims.

He stated that investigations conducted by the International Organisation for Migration (IOM) had revealed that areas, including Berekum, Nkoranza, Dormaa, and Techiman in the Bono and Bono East regions, represented the main towns with high numbers of irregular migrants in the two regions considered as migration-prone communities.

Mr Osei-Savio Boateng stated that VIS Ghana and Don Bosco later decided to collaborate with the chiefs who submitted letters to BOK Africa Concern to assist them curb the phenomenon in the area.

"The Senasehene provided two plots of land measuring 110ft by 200ft for the warehouse factory project after deliberations on the subject at a stakeholders meeting. He had informed us of the challenges women were facing and was desperate to address them.

"Even those with employable skills and knowledge had faced serious obstacles initially finding locations or sites to start out their businesses, prompting them to search for land," he said.

The Executive Director indicated that the desire and commitment shown by the chiefs and community towards the project had compelled the headship of the Catholic Church to write to the Bishops Conference in Rome, Italy, for its approval.

He thanked the chiefs for working to secure permits for the construction of the soap warehouse project.

He pledged the assembly's readiness to support its successful implementation and commended BOK Africa and VIS Ghana for their remarkable efforts to promote the progress of Senase and the entire Berekum Municipality.