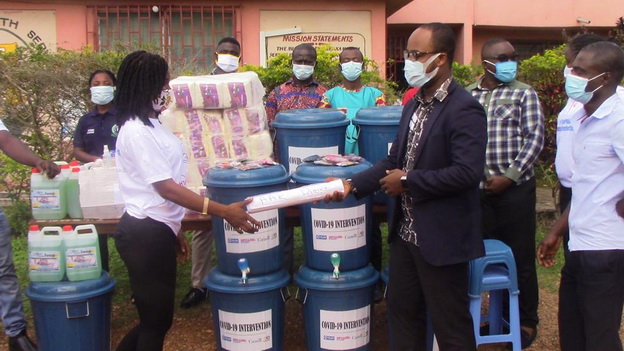 Semada Foundation, a non-governmental organization focusing on mobilising people at the grassroot especially women for the development of their communities, has presented COVID-19 relief items to two districts in the Central Region.

The Foundation which was established in 2018, is implementing Women’s Voice and Leadership – Gender Transformative Programming Project funded by Global Affairs Canada through Plan International Ghana.

Items
The items which were presented to the health directorate of the districts included veronica buckets, packs of hand tissue, liquid soap, nose masks and hand sanitizers.

The items were expected to be distributed to the various Community-Based Health Planning and Services (CHPS) compounds under the directorates to assist them in their service delivery.

Making the presentation, the Project Lead of the Semada Foundation, Ms Gifty Ahwireng, said the items were to support the directorate and the CHPS compound in the performance of their function with the items and to compliment government’s effort at equipment the health facilities with enough of these items during these trying moments.

She said even though the figures went down for a while, they were picking up again and that there was the need to maintain the protocols and not to relax them until such time that the world is declared free of the pandemic.

She said the items were the foundation contribution to the fight against the spread of the pandemic.

Gratitude
The Nutrition Officer for the Abura Asebu Kwamankese District, Mr. Joseph Korsah, who represented the District Director of Health, was grateful to the foundation for the donation which he described as timely as it would go a long way to assist the directorate in its service delivery.

He further expressed their gratitude to Plan International Ghana and Global Affairs Canada for funding and supporting the project.

Related development
The foundation similarly distributed free nose masks and hand sanitizers to traders at the Nyanfeku-Ekroful and Essiam markets in the two districts.

The team also educated the traders on proper hand washing procedures and the appropriate use of the nose mask. Posters and flyers on the COVID-19 protocols were also distributed to inform and educate them.