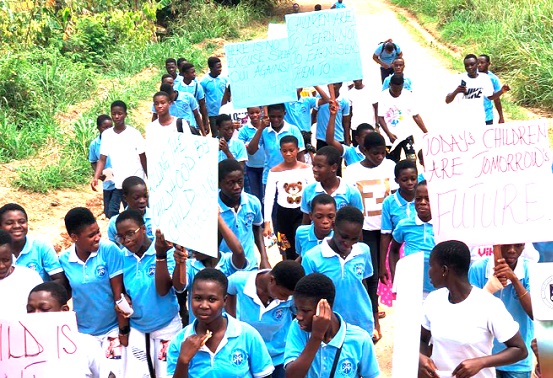 Some campaigners walking through the town with their placards Follow @Graphicgh

The Ankwansu Anglican Child and Youth Development Centre has embarked on a child protection awareness campaign with a float through the streets of the Ankwansu community in the Eastern Region.

The centre is a frontline church partner of the Akuapem Cluster under the supervision and funding of Compassion International - Ghana - an international Christian non-governmental organisation (NGO) with the aim of releasing children from poverty.

The campaign was aimed at sensitising and educating caregivers, community folks and beneficiaries on the need to protect children from abuse at all times, as well as reporting abuse cases when they happen.

The float began from Aboabo through to Ankwansu and Obosono communities in the Akuapem South of the Eastern Region.

It attracted dignitaries such as traditional leaders, religious leaders, as well as other youth leaders in the community.

They held placards with inscription such as ‘Childhood is not motherhood’, ‘Children are too small to earn,’ ‘If a child says I’m scared adults should believe it’, ‘Give children a voice to be that voice’, among many others.

During the procession, some of the members also moved into homes to educate parents and guardians on the adverse effect of child abuse.

Speaking to the Daily Graphic after the exercise, the CPC Chairperson, Daniel Adu Gyedu, expressed his excitement about the success of the campaign.

Consequently, he said caregivers and the community folks would now understand that issues of early marriages and child labour were all abuse cases and would begin to desist from such acts.

Mr Gyedu further expressed discontent with how abuse cases had been on the rise across the country and how it was impeding child progress.

He, therefore, called on the government and other related agencies to enforce laws affecting child protection, indicating that was the only solution to slow down the rising cases of abuse.

The Director of the centre, Barbara Osei-Bonsu, also highlighted how impactful the campaign had been.

She said the campaign was timely as figures in abuses cases continued to rise, particularly during the era of the COVID-19 pandemic.

Rapid assessments conducted by United Nations Children's Fund (UNICEF) and partners in 2020 showed that violence and abuse at home might be on the rise in the context of the COVID-19 pandemic.

About 32 per cent of adolescents and young people reported having observed increased abusive behaviour within their families, including financial abuse (34 per cent), emotional abuse (32 per cent), physical abuse (17 per cent), sexual abuse (10 per cent) and mental/psychological abuse (seven per cent).

Evidence also shows that there is a strong increase in child abuse cases and a decline in violence prevention programming (77 per cent decline) in the Greater Accra and Ashanti regions.