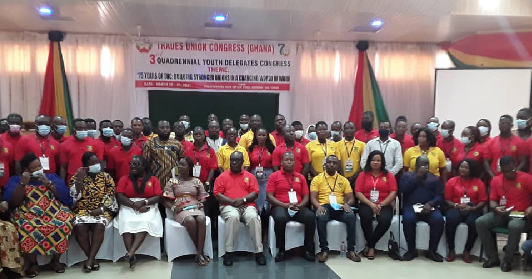 Some participants and dignitaries after the opening session
30.5k Shares

The Secretary-General of the Trades Union Congress (TUC) of Ghana, Dr. Yaw Baah, says he expects the new taxes introduced by the government to be taken off once things return to normal.

He said while he acknowledged that it was regressive to rely on indirect taxes to develop a country, the exigencies of the times had necessitated the action from the government, stressing that the taxes should be scrapped once things improved.

“I take it that the taxes that have been imposed are a way of getting out of the crisis because we are not in normal times.

“If we are not in normal times, we cannot use normal ways of getting out of it, and once we get out of the crisis, I don’t foresee these taxes continuing forever,” he said yesterday when he addressed the media after the opening ceremony of the third quadrennial youth delegates congress of the TUC in Kumasi.

The congress, dubbed: “75 years of TUC — Building stronger unions in a changing world of work”, is being attended by about 200 delegates made up of young workers of the 18 affiliate national unions of the TUC.

The event will discuss and decide on thorny policy issues for young workers.

Dr. Baah observed that the congress was losing members as a result of lack of employment, saying unions relied on jobs, and so if nobody had a job, there could be no union member.

“The biggest challenge we are having now is we are not having jobs. Our membership is dwindling.

“So if you have a situation where there are no jobs and union membership is dwindling, then you can count the number of years that the unions would be out of existence,” he said.

Dr. Baah said to bring the issue up to the fore, the policy discussion of the upcoming congress of the TUC would focus on how the “government and all of us as social partners should work together to create jobs for young people.

“That is the only way unions will exist for the next 75 years and beyond,” he said.

The TUC secretary-general said other related issues such as decent jobs, the right to form and join unions, low salaries and housing for workers, among others, would also be discussed.

He said low wages had a direct impact on people’s pensions and, therefore, there was the need to improve not only decent jobs, but also “having good salaries for workers and good pension when they retire”.

He advised the youth to continue to upgrade themselves in order to take advantage of opportunities when they come, stressing that the best way to succeed was through self-development.

He said many Ghanaians did not own their houses, and that it should be possible for workers to have their own houses after 20 years of working.

Earlier at the opening ceremony, the Greater Accra General Secretary of the TUC, Ms. Freda Stephanie Frimpong, observed that although there had been an improvement in the number of youth in trade union activism over the years, youth participation in trade unions was still low.

She said the youth must be seen as a constituency, and as such the unions must work for and invest in the youth, emphasising that the contribution of the youth to trade unionism was critical now more than ever considering the challenges the world and unions faced today.

She stressed the need for unions to demonstrate their relevance in the socio-economic transition of the youth to the workplace.

She said a good starting place to engage young people “is to mark what proportion of them is expected to join the labour market and to analyse their experiences at work”.

“Trade unions should work for the youth and should be led by the youth themselves. Let’s refocus and reenergise and we must come stronger and effective if we are to realise our vision, and it will require the contribution and participation of the youth,” she noted.