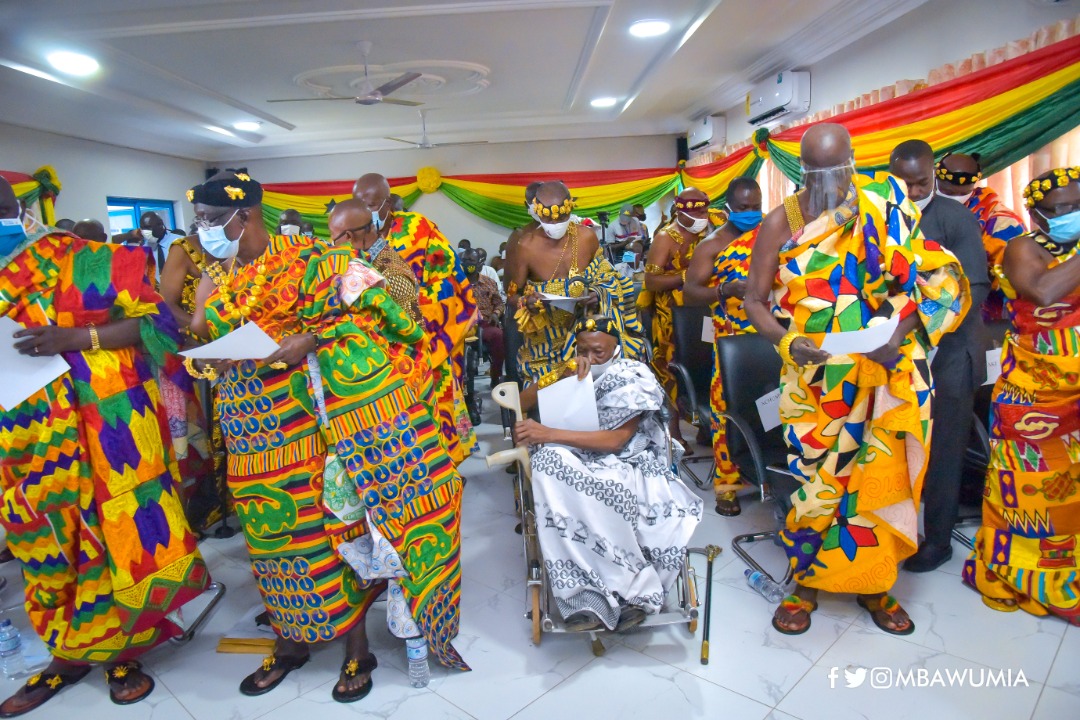 Members of the newly created Oti Regional House of Chiefs have expressed their profound gratitude to President Akufo-Addo for the creation of the region.

The Oti Region was created out of the Volta Region after an emphatic YES vote in a referendum last year, and the process was completed with a historic inauguration of the Oti Regional House of Chiefs by Vice President Dr Mahamudu Bawumia on Tuesday, September 22 at Dambai.

At the colourful inauguration, the traditional authorities did not hide their excitement and gratitude towards President Akufo-Addo, the man who made their dreams a reality.

"Thank you for giving us an identity with the creation of the new region," the traditional authorities said during their address.

According to them, the creation of the new region has given them an identity, and they will remain thankful to President Akufo-Addo.

Speaking at the ceremony, Vice President Bawumia said the creation of six new regions has re-demarcated the administrative boundaries of the country and will help speed up development.

He added that the government of President Akufo-Addo is committed to bringing democracy to the people, and urged the chiefs to be part of the process, using their revered institution.

"As the President said in Goaso during the inauguration of the Ahafo Regional House of Chiefs, Government is determined to bring governance closer to the people, and expand the boundaries of democracy in our country."

"We are counting on you to help shape and integrate yourselves into these developments. This way, the peculiarly Ghanaian contribution to the concept of governance, which emanates from the integration of royal, aristocratic institutions into the fabric of a republican, democratic framework, will be enhanced and strengthened to the benefit of the Ghanaian people."

"I urge you to speak out and join Government’s fight against the ills of our society – corruption, social and economic injustice, crime, the illegal mining menace, popularly referred to as galamsey. As Chiefs, you have a responsibility, as was done in the days of our forefathers, to help preserve our lands, water bodies and environment."

The Vice President also updated the chiefs on the extent of development projects the Akufo-Addo government has undertaken in the region so far.

"There are 299 projects being executed in the Region, with 159 completed, and the remaining 140 ongoing. These are projects in education, health, roads, water and sanitation, etc.," Dr. Bawumia said.

"Together with flagship policies like the free SHS, planting for food and jobs, one district one factory, one district one warehouse, one constituency one ambulance, NABCO, Zongo Development Fund, as well as the provision of free electricity and water, the people of Oti have seen a lot of development and improvement in livelihoods in less than four years under President Akufo-Addo. We therefore need to protect all these achievements as we seek to do more in the next four years with your support”. Dr. Bawumia stated.