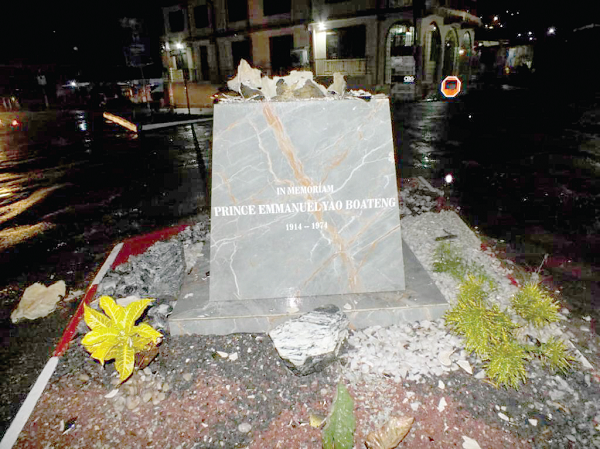 The base of the destroyed statue
30.5k Shares

The New Juaben Traditional Council in the Eastern Region has warned against acts of indiscipline by the people in the area.

This followed the erection of a statue at the main roundabout from the paramount chief's palace by children of one Oheneba Yaw Boateng, son of a late paramount chief of the traditional area, Nana Kwaku Boateng I, who ruled from 1913 to 1930.

Consequently, the traditional council last Tuesday, demolished the said statue which the council described as illegal, disrespectful and an affront to the council.

Reasons given by the council and confirmed by the Registrar, Mr Maxwell Asante, said the statue was erected without the authority of the Paramount Chief, Dasebre Oti Boateng, which was considered gross disrespect to the paramount chief who is the occupant of the Yiadom - Hwedie Stool, as well as the overlord of the New Juaben Traditional Council.

According to the council, Oheneba Yaw Boateng, who was not a royal from the Yiadom-Hwedie Royal Stool, derived his status as Oheneba from his father, Nana Kwaku Boateng I.

"One would have expected the children of Oheneba Yaw Boateng, who erected the statue to exercise due diligence and circumspection by first considering their grandfather, Nana Kwaku Boateng for the honour rather than his son ‘Prince Yaw Boateng’ displayed boldly on the said statue, which is also considered very offensive to the Akan customary practice and usage. The said inscription is a dirty trick to deceive the public," the council said.

The council, among others, said it had already earmarked the very spot for the statue of Nana Kwaku Boateng to commemorate his unique contribution as the paramount chief who built the New Juaben Palace and that decision was non-negotiable and could not be varied in any way.

"Oheneba Yaw Boateng has not done anything tangible for the New Juaben State to merit the erection of his statue at such a vantage point or anywhere else in the traditional area; besides, it is totally wrong on the part of his children to take such an extremely self -serving and inward-looking decision to honour their father without involving the traditional leadership," the council stated further.

It said when the children of Oheneba Yaw Boateng were summoned on February 5, this year for questioning, they apologised and agreed to remove the statue but reneged on their promise and rather circulated and distributed the erection process abroad.

"Wherefore we had no alternative than to remove the statue on March 23, 2021," the council explained.