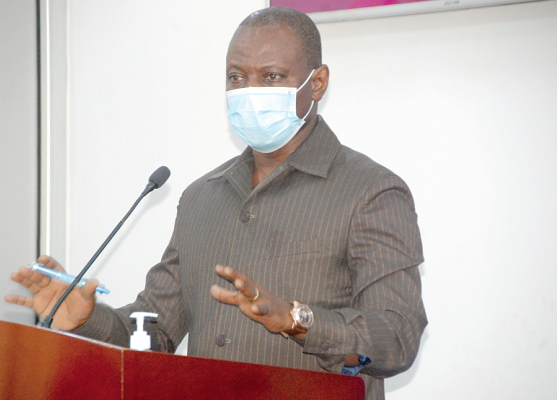 The Ghana Heath Service (GHS) says it has identified a wide community spread of the mutated United Kingdom (UK) variant of the COVID-19 that can take over the traditional one if the public continues to defy the safety protocols.

It said that was a cause for worry because the UK variant had a higher and faster rate of spread, results in severer sickness, with high numbers of people exposed to it falling sick, unlike the traditional form of the virus.

Addressing the media at theMinister's Briefing, a national platform for providing updates on the national COVID-19 situation and response, in Accra yesterday, the Director-General of the GHS, Dr Patrick Kuma-Aboagye, reiterated the need for the public to enhance adherence to the safety protocols.

He said although the service had put in place measures to contain the spread of the new variant, the desired result of breaking the transmission could not be achieved if members of the public refused to wear their face masks and strictly adhere to all the other safety protocols.

He mentioned some of the measures as enhanced contact tracing, testing and treatment.

“We must continue to adhere to hand and respiratory hygiene. Always cough into a face mask, flexed elbow or a tissue and dispose of it immediately into a closed bin and wash or sanitise your hands immediately. We must also observe between one and two metres of social distancing protocols at all times,” he said.

The director-general reiterated the fact that during the last two surge incidences last year, 21 per cent of recorded cases were falling sick, with majority being asymptomatic, but currently the situation was different, with 32 per cent falling sick.

He said the widely spreading new variant was identified when the service intensified its community surveillance to ascertain whether the new COVID-19 variant was spreading within communities.

That was after recording a case each of the new UK and South African variants among travellers at the Kotoka International Airport (KIA).

At a similar briefing a week ago, Dr Kuma-Aboagye had said the service suspected that the new variants picked at the airport could be the reason a high number of people exposed to the virus were falling sick, compared to previous situations.

He disclosed that the GHS was enhancing the national response measures, such as contact tracing, testing, treatment and the provision of personal protective equipment (PPE).

He said the GHS was also intensifying public education and had scheduled sensitisation sessions with key stakeholders, such as market women, driver unions and cooperatives.

“The Pentecost Convention Centre, which was previously used and handed back to the church when cases began to decline, has become operational from February 1, 2021,” he said.

He said all contacts or cases would have to mandatorily self-quarantine for 14 days and monitored.

Providing an update on the national situation, Dr Kuma-Aboagye said Ghana had, as of January 30, 2021, 5,515 active cases.

He said 61,843 people who tested positive for the virus had recovered and been discharged, with 424 infected people dying.

The director-general said a research conducted by the service had established that the wearing of face masks, which was at 44 per cent last year, had dropped to as low as seven per cent and over time risen to 42 per cent as of last month.

He said non-compliance with proper face mask wearing and other safety protocols had been a major cause of case surges in the country.

People who fail to wear face masks in public commit an offence that carries a prison sentence of four to 10 years or a fine ranging from GH¢12,000 to GH¢60,000, or both, as contained in Executive Instrument (E.I. 164).

Paragraph 4 (1) of E.I. 164 states that the police have the authority to make random checks to “ensure enforcement and compliance”.

According to Paragraph 4(2) of E.I. 164, any person who fails to comply with the mandatory wearing of face masks shall be punished in accordance with Section 6 of Act 1,012.

Dr Kuma-Aboagye said the GHS was also focusing on the promotion of decongestion at workplaces because there had been a number of workplace outbreaks.

He said the nature of workplace spread was such that every single case was a potential outbreak due to the level of interaction, common touch surfaces and the enclosed nature of most workplaces.

He cited nine workplace incidences which resulted in over 700 cases.

“We must, therefore, ensure that workplaces are adhering to the mandatory presidential directive to operate shift systems and employ virtual working platforms,” he said.

He appealed to institutions to desist from managing any case or suspected cases in isolation because that could result in the system at the national level missing a number of cases that could aggravate the national burden.