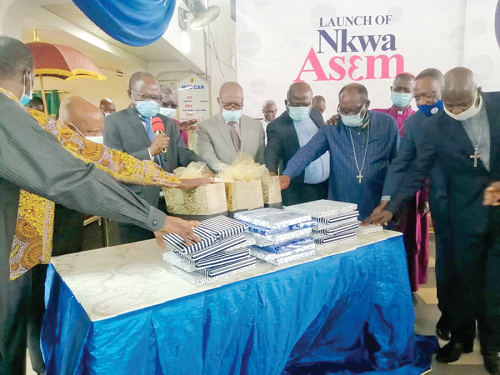 The members of the KCCC and Biblica praying over the Nkwa Asem before the launch
30.5k Shares

Known as Nkwan Asem, the new Asante Twi Bible provides an alternative to Twere Kronkron, which was published by the Bible Society of Ghana.

The Nkwa Asem, which was published by Biblica, formerly known as the International Bible Society, is to provide a much simpler and easy to read Twi Bible and also serve as a secondary source of scripture just as the English Bible also has so many versions.

Speaking at the launch, Rev. Walter Aboagye Frimpong said Biblica had a rich history that spanned over 200 years and had worked across the globe translating the Bible into the various languages to make it easier for the people to understand the Word of  God.

He said,so far, the organisation had translated the full Bible into 64 languages and the New Testament into 16 local languages.

According to him, it took Biblica 24 years to complete the Nkwa Asem Bible and paid glorious tribute to all those who helped in the translation and the review.

He said the mission of the organisation was to provide the Bible to the people in accurate, contemporary translations and formats to enable people around the world to have the opportunity to be transformed by Jesus Christ.

The chairman of the occasion, the Primate of the West Africa Province of the Anglican Church, Most Rev. Prof. Daniel Yinkah Sarfo, stressed the need to have different versions of the Twi Bible just as there were in English to provide the people with varied meanings of the Word.

He said currently, the Twere Kronkron provided only one meaning to the Bible in Asante and the people did not have any other alternative, when they failed to grasp the meaning of what they read.

However, he said, with the launch of Nkwa Asem, people would now be in a position to compare the meanings and be able to arrive at a decision when confused.

Explaining the name Nkwa Asem, one of the translators, Rev. Dr Ebenezer Boafo, explained that the word of God is a living word and unlike the texts in novels and story books which are descriptive and communicate, the words in the Bible go beyond just communication and are transformative and give life.

He said it was based on this that they decided to call the new Asante Twi Bible Nkwa Asem: The Living Word.

He said the organisation was ready to support other minority language speakers such as Larte and Efutu to translate the Bible into their languages.

He said they could adopt the Twi version to help them to do the translation and said Biblica was ready to provide the technical support to achieve that.

According to him, the objective of the organisation was to get everybody to read the Bible in their own native language for better understanding.

Baffour Agyei Ofosu Twitwiakwa II, who represented the Asantehene, Otumfuo Osei Tutu, also commended Biblica for the feat and explained that the new Asante Twi would also help in the spread of the Twi language as more children would learn how to read in Twi and thereby become fluent in the language.

He said the new Twi Bible would also help in the promotion of the Twi language in the country.