Commit to the change you promised - Nduom charges Akufo-Addo

On his facebook page, Dr Nduom stated, “On behalf of the Progressive People's Party, I wish to congratulate Nana Addo Dankwa Akufo-Addo and welcome him as the President of the Republic of Ghana”. 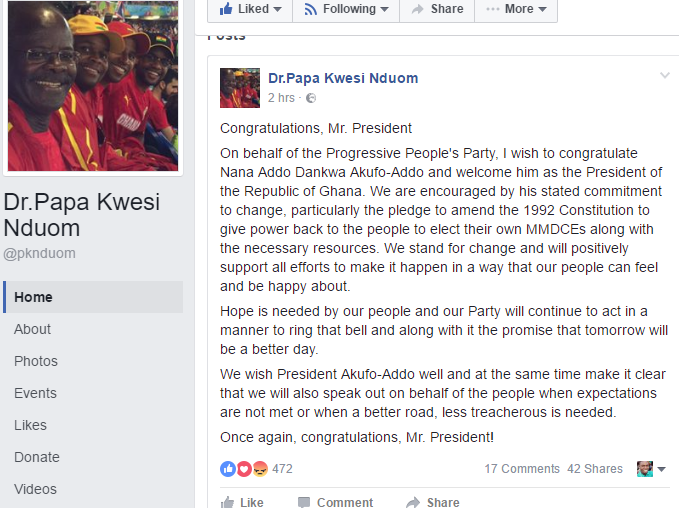 “We are encouraged by his stated commitment to change, particularly the pledge to amend the 1992 Constitution to give power back to the people to elect their own MMDCEs along with the necessary resources. We stand for change and will positively support all efforts to make it happen in a way that our people can feel and be happy about.”

He further stated that, his party is ready for any supportive role that may be assigned to them.

“Hope is needed by our people and our Party will continue to act in a manner to ring that bell and along with it the promise that tomorrow will be a better day.”

The President stated that, they will continue to criticize the government on behalf of the people when expectations are not met.

“We wish President Akufo-Addo well and at the same time make it clear that we will also speak out on behalf of the people when expectations are not met or when a better road, less treacherous is needed.”