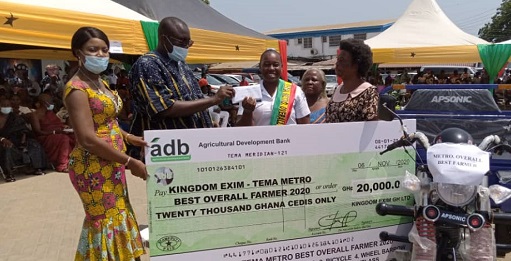 Last week Friday, farmers and fishermen across the country were honoured in what has become an annual award event that identifies and honours food producers who are doing their best to ensure food security.

Petty Officer Second Class Philomena Sapak emerged the winner from a field of seven awardees in the Tema Metropolitan Area. Her prize was a tricycle, a knapsack spraying machine, radio set among other items worth GH¢9,579.00 . She also took home cash of GH¢20,000 donated by Kingdom Exim Group of Companies, one of the sponsors of the awards in the Tema Metropolitan Assembly.

Petty Officer Second Class Philomena Sapak was born on March 11, 1985, at La in the Greater Accra Region. Originally from Bolgatanga in the Upper East Region, she took to farming at an early age by observing the backyard farming at home and that of her neighbours.

Education
She started her education at the Anum Memorial Preparatory School in Ashaiman. She continued her academic life at PRISBEL Educational Complex and proceeded to Ashaiman Senior High School where she studied General Agriculture based on her childhood dreams of becoming a farmer.

She also attended the Global Training Institute in Tema to study vocational skills. In 2007, she was enlisted into the Ghana Navy but her professional career did not dissuade her from pursuing her passion, farming.

Buoyed by her childhood dreams and her background in agriculture in senior high school, she started her piggery and crop farming at Akuse and subsequently relocated to Tema in the year 2016 and has since been combing her job as a navy personnel and a farmer.

Currently, she has 13 boars, 13 sows, 63 piglets in her piggery. In addition, she has 22 goats as well as a number of local fowls which she rears. Aside from this, she has a farm made up of 50 plantain trees, 10 beds of lettuce, 2.5 acres of okra, two acres of pepper, five acres of maize, 0.5 acres of cassava, potatoes and cocoyam.

Petty Officer Second Class Philomena Sapak told The Mirror that being a professional soldier and a farmer had been an easy journey. According to her, having to juggle her professional career with her family life and gradually expanding the piggery project as well as the farm can be challenging.

“Most often I have to wake up at dawn to prepare meals for my family before going to work. After work, I come back home, change into my farm gear to attend to the pigs. It is not easy but with the help of my farm assistants, I am able to cope,” she said.
She has employed one man and a woman permanently with five other casual labourers to assist her on her farm.

Professional career vs farming
A mother of two, Petty Officer Class Two Sapak, who is divorced, said she has received great support from her family, especially her two sons (11 and five years), who occasionally join her in mixing of feeds and bathing the pigs.

She also commended the efforts of veterinary officers who continue to provide vital services to keep her going.

She urged women to go into farming which is fast gaining recognition and holds great prospects for higher earnings compared to other professions.

She said though a navy personnel, she has gained tremendously from farming. An elated Madam Sapak expressed appreciation to the Tema Metropolitan Assembly and the Metropolitan Department of Agriculture for the great honour bestowed on her as the winner of the coveted prize of the metropolitan farmer.

Challenges
She said the sector was not without challenges and called on the government and stakeholders to support farmers especially women to enable them to engage in farming to feed the nation.

She said access to land has been a major challenge, especially in urban areas because almost every available land has been taken over by buildings and other social amenities thus lands which used to be farmlands some years ago are no longer available for farming.

She also appealed to the government to increase access to credit and soft loans to farmers, especially women farmers, to boost their capacity.

Currently, Petty Officer Second Class Sapak is putting up a modern structure with facilities that can handle up to 600 pigs at her farm in Bankuman in Tema Manhean.

She also disclosed that she has plans of acquiring a land outside the Tema Metropolis to rear about 1000 pigs and also venture into poultry to produce and supply eggs.

Madam Sapak encouraged women to venture into farming, stressing that although it was not easy, it was profitable. 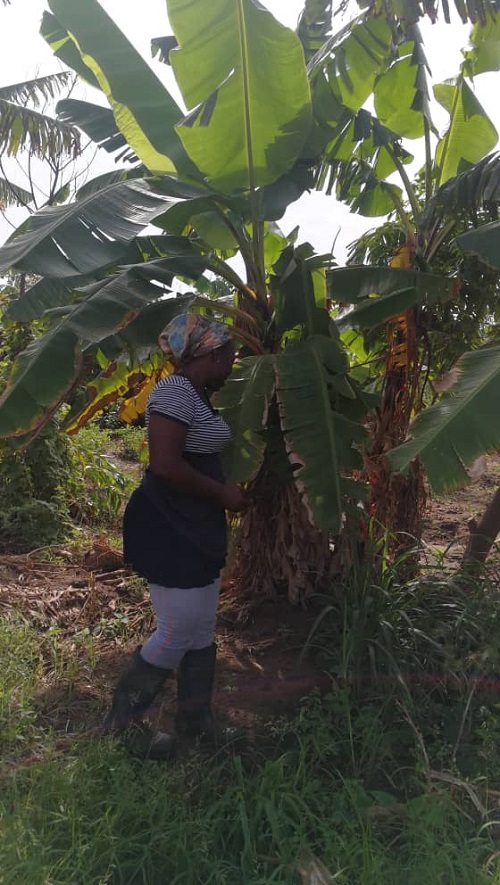