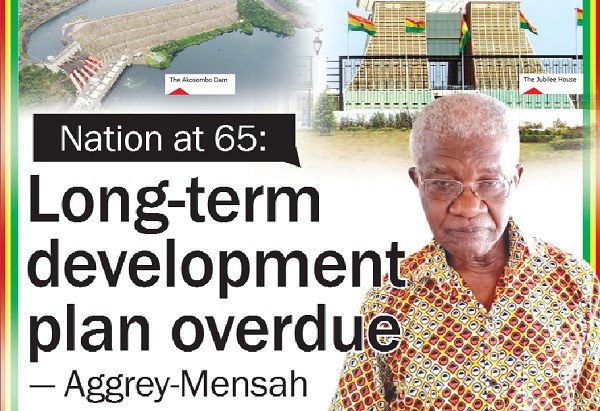 As the country marks its 65th independence tomorrow, a senior citizen and statesman, Mr Joseph Aggrey-Mensah, is advocating a long-term development plan to steer the country along the path of sustainable progress.

The former Director-General of the Post and Telecommunications Corporation (P&T), now split into Ghana Post and Vodafone Ghana, recalled the seven-year development plan of the First Republic which was discontinued and pointed out that if that had not happened, the fortunes of the country could have been far better.

Sharing his experiences from the First Republic to date in Accra yesterday, he lamented: “It is a tragedy that the seven-year development plan of Dr Kwame Nkrumah was never followed through and completed: we could have built on this foundation for the accelerated national development of the country.”

He, therefore, rallied Ghanaians, irrespective of political persuasion, to join hands to formulate a long-term national development plan as a first step to turn around the fortunes of the country.

Sharing further thoughts on the country’s achievements and development challenges, Mr Aggrey-Mensah said currently the nation had no clear-cut development goals, saying, “All the sectors of the economy are challenged”.

The octogenarian said the country appeared to have missed its development track after 65 years of independence and cited Japan, which according to him, locked her borders for about 300 years to fast-track her development.

“Today look at where they are,” he added.

Mr Aggrey-Mensah pointed out that right after independence, the country started well with the formulation of the seven-year development plan.

The engineer stated that after Dr Nkrumah's overthrow on February 24, 1966, the country's development path was affected significantly.

“The seven-year development plan was truncated and since then each government had developed its own plan.

“If the country had stuck to the initial development plan of Dr Nkrumah, completed it and moved forward to draw up sequels of long-term national development plans and rigidly implemented them, the country's fortunes in all sectors would have significantly improved by now,” he stated.

Mr Aggrey-Mensah indicated that the current situation where every government that came to power tried to implement its own development agenda was not helping the country and rather resulted in fragmented uncompleted projects and the payment of huge judgment debts.

Taking a look at governance, Mr Aggrey-Mensah stressed the need for the country to have an all-inclusive government.

He also advocated state funding of elections to reduce corruption.

He posited that the bane of the country's development had been divisive politics, disunity, ineffective separation of powers and a dearth of effective implementation of a long-term national development plan. Equally pervasive, the engineer said, was corruption as well as the monetisation of political campaigns and elections.

The 80-year-old former boss of P&T, supervised the successful separation of the postal wing from the telecommunication operations.

Further on politics, Mr Aggrey-Mensah said the practice of multiparty democracy had to some extent caused divisiveness and corruption among the citizenry, but he was quick to add that even in the advanced democracies, those challenges persisted.

However, he maintained that in governance issues, the country had not fared well over the years, particularly as it fused the legislative and the executive arms of government together, culminating in the election and the appointment of an individual as both a Member of Parliament (MP) and Minister of State.

Mr Aggrey-Mensah said that system undermined the concept of Separation of Powers, hence did not augur well for effective governance.

“How can one person perform both functions of an MP and Minister of State effectively?” he asked rhetorically.

The former P&T director-general and managing director of Ghana Telecom indicated that the country's formal education system had also failed because so far it had not been able to produce, for instance, a workforce that had the requisite skills and knowledge to be able to extract oil and process a cash crop such as cocoa into other finished products for export to increase the country's foreign exchange earnings. Rather, he said, the country imported almost all its needs, including tomatoes, rice and other commodities from neighbouring countries such as Burkina Faso, while the oil extracted from the country was also sold out in crude form, leaving the country with little revenue.

Mr Aggrey-Mensah opined that it took some level of quality education and knowledge to extract oil for export and that had not been done over the years.

He further touched on nationalism and patriotism and observed that for those two positive traits to be inculcated in the youth for them to permeate society, the starting point was leadership.

Leadership, Mr Aggrey-Mensah said, had a crucial role to play in fostering nationalism and patriotism.

The leaders were required to demonstrate those traits for the entire citizenry to emulate, he said.

...and views from first capital

Some elders and opinion leaders of Cape Coast have called for stronger unity among Ghanaians to chart a path of development for the nation.

They further called for a change in the thoughts and attitudes of the people to support development efforts.

Sharing their perspectives on 65 years of independence, the residents said there was no way the country could achieve the expected development if there was no unity of purpose among the people.

Cape Coast was the administrative capital of the Gold Coast until 1877 when the British colonial authority transferred the seat of government to Accra.

"If there is no unity, nothing will work and I think we as a people need to re-orient our mindset and support efforts towards development," Ebusuapayin Bessa-Simons, an elder, stated.

He also called on citizens to be ready to make sacrifices to speed up the development and growth of the local communities and the country in general.

The elder added that residents of Cape Coast had a crucial role to play in crafting a progressive path for the nation because of the city’s historical importance.

Although he was happy that after many years, the decentralisation policy of the government will enable the city to host the national Independence Day parade tomorrow (Sunday), he said Cape Coast needed more than celebrations.

“There are a lot of things that must be done to improve the conditions of the people of Cape Coast and the Central Region in general. Our Fosu Lagoon has been left to rot and several promises to develop the metropolis into a major tourism destination has not materialised,” he lamented.

Ebusuapayin Bessa-Simons insisted that tourism should be more than visits to the castle.

He called for the establishment of industries to reduce the level of unemployment and poverty in the area.

"We know that Ameen Sangari factory is being resuscitated but that is all. There are no other factories in Cape Coast and this is contributing to the worsening unemployment in the area," he stated.

He also said they needed to get the youth involved in planning for the development of the metropolis.

The elder noted with concern that the first capital, with rich heritage and tourism significance, had been grossly neglected in infrastructural development.

Another elder, Baffoe Eghan, who was about nine years of age when independence was declared, said hosting the event in Cape Coast was a great moment for the people.

"We were happy and expect that many great things will come along with hosting the independence anniversary celebration," he said.

Mr Eghan said the elders and leaders of Cape Coast did their bit in the struggle for independence, long before the United Gold Coast Convention (UGCC) and the Convention People’s Party (CPP) were birthed.

He stated that the Aborigines' Rights Protection Society formed by Fante chiefs and elders, and the Confederation of Fante Chiefs were a significant part of the struggle for independence.

“We knew the natives were given different wages and did not have access to certain places and the fight for freedom began with us, but where we are now in terms of development is worrisome," he stated.

Another resident, Mr Jacob Enninful, said Cape Coast had over the years not received its fair share of infrastructural development.

Mr Enninful also called on citizens of Cape Coast living abroad to turn their attention back home and support the development of the community.

For her part, Maame Mansa Ehunn, said the people of Cape Coast wanted the government to be real with them.

"Cape Coast needs more than celebrations; we want concrete development that will impact our lives for the better," she posited.