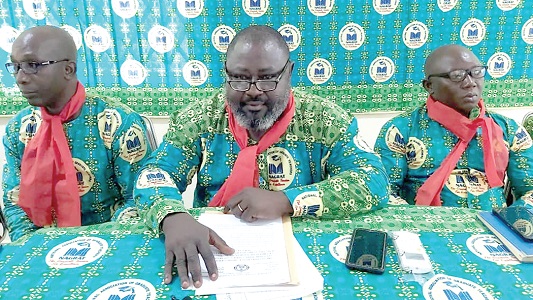 Regional branches of the National Association of Graduate Teachers (NAGRAT) have piled pressure on their national executives to conclude negotiations with the government for the payment of cost of living allowance (COLA) following deteriorating economic conditions in the country.

During this year’s May Day celebration, organised labour urged the government to pay 20 per cent of basic salary as COLA to workers.

The regional NAGRAT branches have been taking turns to organise press conferences to communicate their concerns over the inability of the government to reach an agreement with the association on the payment of the allowance.

They include the Bono, Ahafo, Bono East and Greater Accra branches.

They gave the national leadership of the association a week’s ultimatum to reach an agreement with the government over the allowance or they would lay down their tools.

In Bolgatanga in the Upper East Region, members of the association urged the government to heed the calls by organised labour for the payment of COLA, reports Gilbert Mawuli Agbey.

The Upper East Regional Chairman of NAGRAT, John Akunzebe, said the prices of goods and services continued to rise, while teachers’ salaries remained the same.

“The introduction of new taxes by the government has worsened the already bad condition of the people,” he added.

The Bono, Bono East and Ahafo regional secretariat of the association also claimed that several calls by labour unions to the government on the matter had fallen on deaf ears, reports Biiya Mukusah Ali

The Bono Regional Chairman of NAGRAT, Augustine Akidam, who addressed a press conference in Sunyani, said the current economic condition of teachers and other workers had worsened as a result of the unbearable cost of living, adding: “We are on life support.”

Addressing the press in Accra yesterday[June 28, 2022], the Greater Accra Regional Chairman of NAGRAT, Henry Teity Tetteh-Afi, said the silence, indifference and insensitivity being exhibited by the government would no longer be tolerated, reports Emmanuel Bonney.

“The suffering as a result of severe economic hardships is simply unbearable at this time. The teacher has suffered so much for this nation, yet we retire into misery and undignified death.

“This state of affairs should not be allowed to continue," he said.