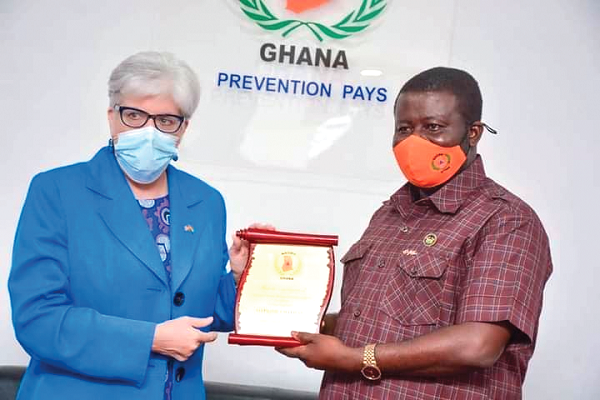 Mr Eric Nana Agyemang-Prempeh (right) presenting a plaque to Mrs Stephanie S. Sullivan in recognition of US support to the organisation
30.5k Shares

The United States Embassy in Ghana is to collaborate with the National Disaster Management Organisation (NADMO) to find solutions to disaster challenges in Ghana.

According to the US Ambassador to Ghana, Mrs Stephanie S. Sullivan, disaster prevention and management were key to protecting lives and property.

Mrs Sullivan said this during a courtesy call on the Director-General of NADMO, Mr Eric Nana Agyemang-Prempeh, in his office in Accra last Friday.

The Ambassador was accompanied by a team from the North Dakota National Guard (NDNG) in the US.

Discussions at the meeting centred on key issues of disaster prevention, response and communication strategies.

NADMO has the mandate to coordinate and manage disasters in the country. Apart from governmental support, it seeks partnership and collaboration with stakeholders in and outside the country to achieve results.

Over the years, NADMO has received support from the NDNG in the areas of training and simulation exercises.

For instance, as part of its capacity-building programme to effectively respond to disasters, particularly earthquake, NADMO, in collaboration with the NDNG, undertook a simulation exercise in Accra in May 2018.

Mrs Sullivan further enquired about the aftermath of last year’s floods in the north of the country and urged NADMO to work closely with neighbouring countries to find a solution to the perennial flood situation in the area.

Flooding in the north

In his response, Nana Agyemang-Prempeh mentioned the construction of the Pwalugu Dam in the Upper East Region as a major project that would help address flooding in the north.

He said the government was committed to fighting disasters, particularly earthquakes, floods and fire outbreaks.

According to the D-G, the major focus of NADMO was the prevention of disasters from occurring.

He expressed appreciation to the NDNG for its continued support to the organisation.

Present at the meeting were NADMO’s Director in charge of Climate Change Adaptation, Madam Charlotte Nana Norman, and the Director of International Relations and Protocol, Nana Asafo-Adjei.