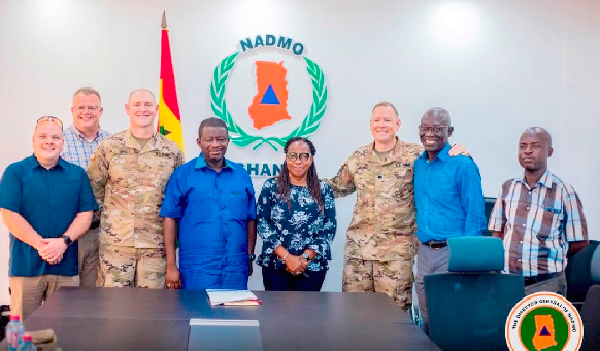 Mr Eric Nana Agyemang-Prempeh (4th from left), Director—General of National Disaster Management Organisation, and Lt. Col. MC Evers (3rd from left), leader of the US delegation and some members of NADMO and North Dakota National Guard

A delegation from the North Dakota National Guard of the US Amey led by Lt. Col. MC Evers has paid a courtesy call on the Director-General of the National Disaster Management Organisation (NADMO), Mr Eric Nana Agyemang-Prempeh, to discuss issues concerning the advancement of Ghana’s emergency response.

For nearly two decades, the North Dakota National Guard have had professional relationship with Ghana, which had seen officers of the National Guard collaborating with NADMO in a number of activities related to disaster prevention and response.

Last Thursday’s meeting with the NADMO Director-General was, therefore, in line with the long-standing relationship and how to scale it up for the benefit of the people of Ghana.

In addition, they discussed capacity building on health and earthquake response for NADMO staff .

The NADMO boss thanked the visiting US team for their continued support to NADMO.

He gave an assurance that NADMO would work with the Ghana National Ambulance Service, the Ghana Health Service and Ghana National Fire Service to be part of the capacity building and response plan.

The NADMO Director-General reiterated the personal commitment of President Nana Addo Dankwa Akufo-Addo and that of the government to disaster management, particularly earthquake, flood and fire outbreaks in the country.