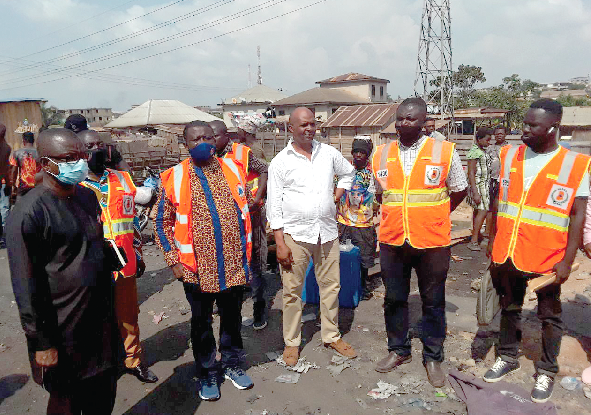 The Director General of the National Disaster Management Organisation (NADMO), Mr Eric Nana Agyemang-Prempeh, has called for broader stakeholder consultations on the relocation of the Dagomba Line slum at Aboabo in the Asokore Mampong Municipality in the Ashanti Region to forestall future fire outbreaks.

He said there were too many fires occurring in the area which demanded that a meeting be held among his outfit, Kumasi city authorities and other stakeholders to find a lasting solution to the development.

Aside from its unplanned nature, he said, the materials used in erecting the living abodes and the kinds of activities that took place in the Dagomba Line made the slum susceptible to fire outbreaks.

Mr Agyemang-Prempeh was speaking to the media after a tour of three areas in Kumasi that were recently affected by fire — the Dagomba Line, the Aboabo Station at Alabar, where 30 shops in a storey building got destroyed and the Suame Magazine.

The visit was undertaken to express sympathy to the people who lost properties and investments.

It was also to assess the situation on the ground and make recommendations to the government for assistance.

The Dagomba Line slum, which houses hundreds of head porters and scrap dealers, was last Monday, January 11, ravaged by fire which destroyed close to 500 wooden structures serving as dwelling places for the people living there.

Meanwhile, the people have begun erecting new structures to replace the old ones destroyed in the fire even before the NADMO director general and his team could finish with their assessment of the situation.

At the time of the visit, some of the residents were seen busily working on their homes.

Mr Agyemang-Prempeh said it was not the first time the place had got burnt, “but whenever there is a fire, the people begin rebuilding in the next two hours”.

He expressed concern over the safety of the structures they were putting up and the lives of the people.

He said the haphazard manner in which the structures had been arranged was a recipe for disaster, noting that it was little surprise that many structures were affected in the inferno.

He was also of the view that the activities that took place in the enclave were also a major contributory factor to the recurrent fire incidents.

“The saddest aspect is that it is the same people who burn tyres at the place who burn the place down. Can we allow this to continue forever?” he asked.

He called on all stakeholders, including the ministries of Works and Housing and Local Government and Rural Development, “to sit down and look for a way forward. Are the people going to be still allowed to stay there without proper planning?”

Commenting on the Suame  incident in which a two-storey building full of vehicle spare parts got consumed by fire last Monday morning, the director general said there was the need to re-demarcate the place to give it a befitting status, “such that there can be ways leading in and out and proper buildings erected, so we don't experience such fires again”.

“Again, this is not the first time. Last year, one part of the area got burnt and today another part has gone up in smoke; it is not the best. Today no life was lost, but we may wake up to some unfortunate news tomorrow. Even though no life was lost, a lot of properties were destroyed,” he said.

At Aboabo, Mr Agyemang-Prempeh advised property owners to liaise with city authorities, particularly city engineers to have the integrity of the building assessed and for engineers to advise them on the way forward.

He said from observation, it was easy to see that the building had developed cracks and posed a great danger to people living around.

He urged them to seek professional advice on what to do before beginning any new development.

At the time of the visit, some of the store owners were seen packing items that had not been destroyed in the fire out of the store rooms.

As the fire was raging, most of the stores on the first floor were brought down to enable personnel from the Fire Service to gain easy access to the fire to extinguish it.