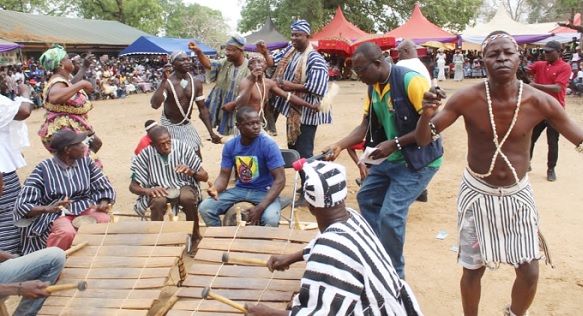 The chiefs and people of the Builsa Traditional Area have celebrated this year’s Feok Festival.

Feok in the Buli language means abundance of food, and the festival is held annually in December in memory of the forebears who led the people to victory against the slave raiders, 'Babatu' and 'Samouri', in the 19th century.

It has, thus, become an annual event of thanksgiving for the people of Builsa to express thanks to God, their ancestors and spirit beings for seeing them through another year and a successful farming season.

The ceremony also coincided with the 10th anniversary celebration of the enskinment of the Paramount Chief of the Area, Nab Azagsuk Azantilow III.

It was on the theme: "10-year reign of peaceful coexistence among the people of Builsa Traditional Area.”

With President Nana Addo Dankwa Akufo-Addo as the Special Guest of Honour, the festival attracted many indigenes both home and abroad.

It was an impressive and entertaining event as various groups, representing the communities, performed war dances.

Armed with bows and arrows, short axes, shields and spears, the dancers re-enacted scenes of resistance and how the raiders were defeated.

The chiefs also attended in their beautiful smocks, complementing their dressing with amulets and talisman-clad headgear, adding grace and colour to the occasion.

Addressing the gathering, President Akufo-Addo stated that the government was working assiduously to remove the nation from the current economic challenges.

"I wish to state that with courage, vision and unity among us all as Ghanaians, we will come out of these current difficulties and get our country back into a good place.

"This is a firm promise that I am making to Ghanaians and I will deliver on it to bring relief to the citizenry," President Akufo-Addo said.

The President also stressed that the government stood strongly with the people in these difficult times, saying "as a government, we will put in place the needed measures and policies to bring the economy back on track for the benefit of Ghanaians”.

He urged Ghanaians to keep faith with the government and provide the needed support to enable the nation to overcome its current economic challenges.

President Akufo-Addo also congratulated Nab Azantilow III on his 10th anniversary and commended him for maintaining the peace and serenity of the people since his enskinment.

"I want to use this opportunity to congratulate you on your 10-year rule which has been peaceful and productive for the people of the traditional area,” the President said.

He made a cash donation of GH¢50,000 to Nab Azantilow III in support of the anniversary celebrations.

Nab Azantilow, for his part, expressed gratitude to President Akufo-Addo and the government for the various infrastructural and social interventions instituted to improve the lives of Ghanaians.

He said, "You did not also forget us in the implementation of the famous 'Agenda 111' hospital project where Fumbisi, the capital of the Builsa South District, is a beneficiary.

Similarly, he expressed appreciation for the provision of a high-capacity power plant to the Sandema Hospital through the Ghana Gas Company to improve healthcare delivery.

On roads, he thanked the government for the award of the Chuchuliga-Sandema-Fumbisi-Wiesi road for bitumen surfacing, adding that "works on other roads have stalled due to the demise of the contractor executing the project".

Nab Azantilow stressed that "the deplorable state of this road network, apart from being a disincentive to road users, also results in frequent vehicular breakdowns and delay in travel hours”.

He also lauded the government for the efforts to deal with the economic challenges the country was facing, which were making life unbearable for Ghanaians.