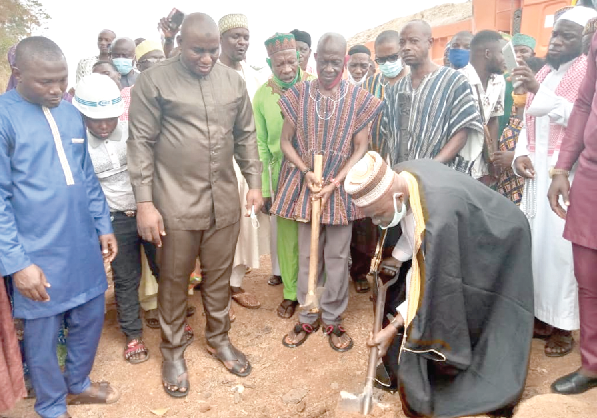 The Muslim Community at Asamankese last Friday cut the sod for remodelling of the Asamankese Cemetery to enhance security and stop encroachment of the burial ground.

The one-square kilometre cemetery would see fencing for the burial spaces for the Muslim Community, as well as for the other centres within the same area.

The first phase of the project will be completed within 12 months before the second phase is initiated.

The Asamankese Muslim Community has also cut the sod for the construction of a multi-purpose library for all students at Asamankese.

In an interview with the leader of the project, Mr. Gibrine Issah Tutu, who is also a personal security detail to President Akufo-Addo called on the youth of the community to unite and support the project.

Mr. Tutu explained that although he was the initiator of the project, there were a lot of people from the community who had rallied their support financially for the project.

He urged the youth to refrain from extreme politics that discouraged development. He added that they should not allow themselves to become puppets for violence during the general election.

The Project Director of Agri-power, Mr. Mashud Mohammed, who was the initiator of the library project, told the Daily Graphic in an interview that the project was to promote education in the Zongo Community as well as the students within Asamankese to complement the free education policy initiated by the government.

The Dwafoakwahene of Asamankese, Nana Kwakye Agyakwa, lauded the project by the Muslim Community and called on the citizenry at Asamankese to support the project when called upon.

He said the project when completed would ensure security against some unscrupulous persons who were fond of digging people's graves for spiritual activities.

The Asamankese Municipal Zongo Chief, Chief Mohammed Bala Shaibu, explained that the remodelling of the cemetery would help the Muslim Community to make judicious use of their burial space with new layouts which would prevent random selection of burial spaces.

He demanded that the Muslim Community give attention to the project, treat it as theirs, and protect it from encroachers.