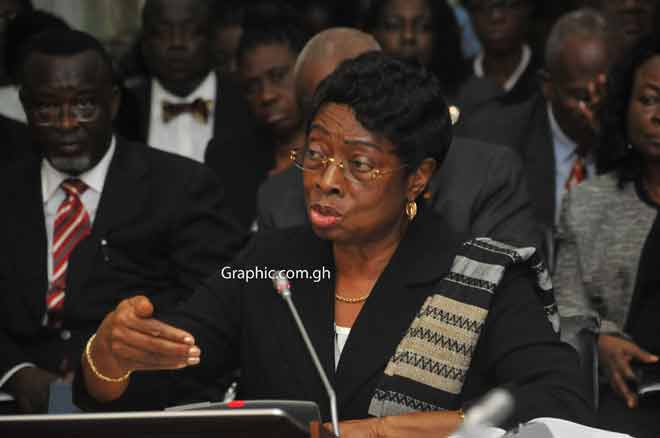 A former Chief Justice, Ms Sophia Akuffo, has expressed displeasure with the allegation by the Member of Parliament (MP) for Asawase, Mohammed Mubarak Muntaka that a Supreme Court Judge offered to bribe a National Democratic Congress (NDC) MP to influence the outcome of the election of a Speaker for the 8th Parliament.

Mohammed Mubarak Muntaka’s accusation according to Ms Akuffo has defamed other innocent Judges of the Supreme Court who have built a reputation for themselves over the years.

This she said, “They [judges] must be very upset, if I was still there, I'd be upset. I'm not there any more but I'm still upset at the very thought that, that kind of accusation will be made."

"I don’t like accusations like that. It is like throwing a bucket of dirty water at people and you were aiming at somebody but you just threw it and it dirties up everybody.”

"You don't have to, I know of eh!, a Supreme Court..., there are, how many of them now, there are 17 people you have defamed in that casual manner but you are talking about only one person so there are 16 people who have been wrongly done by you,” she said.

"I have confirmation that the Chief Justice is looking into it and has written to the Parliamentarian to make himself available to produce the facts, yes."

Ms Sophia Akuffo, however, insisted that if these claims by the MP were true, he should be bold and mention the name of the judge rather than generalize it.

Mr Muntaka who was speaking in a television interview with Joy News last week alleged that a very prominent judge contacted an NDC MP; offering an inducement should the person vote in favour of the New Patriotic Party’s (NPP) Speaker nominee, Prof Aaron Mike Oquaye.

Ms Akuffo who spoke to Joy News in an interview strongly rejected the accusation and described the claim as “bizarre”.

She also indicated that the Chief justice is looking into the matter and has written to the MP to make himself available to assist in investigation.

"There is nothing the Chief Justice can do beyond, well he can write a complaint to the Speaker..., it depends on his methodology after the enquiry the Judiciary wants to do, after that then they can do, if it is found out that the person never turned up or the person was not able to substantiate the accusation, then he will write to the Speaker and demand something, some disciplinary action to be taken against that person. The law doesn't give you the platform to be heard every word you say, to be heard for you to use in a wanton manner."

So that's it. I don't think its true. I choose to believe it is not true. What was he supposed to be bribing the lady with..., but you see, what the consideration he is giving.., money? A Parliamentarian is to be supported by a Justice of the Supreme Court, really? What money does the judiciary have? The whole thing is bizarre. Really it is, and I will be very surprised if it is true. Does it sound plausible to you, really, really, objectively does it sound plausible to you."

"But what has who the Speaker is, got to do with an individual Justice of any court? Maybe he is a personal friend, but whether he is a Speaker or not, what difference does it make to the life of a Supreme Court judge?"