MP for Bole-Bamboi provides boreholes and ambulance for constituents 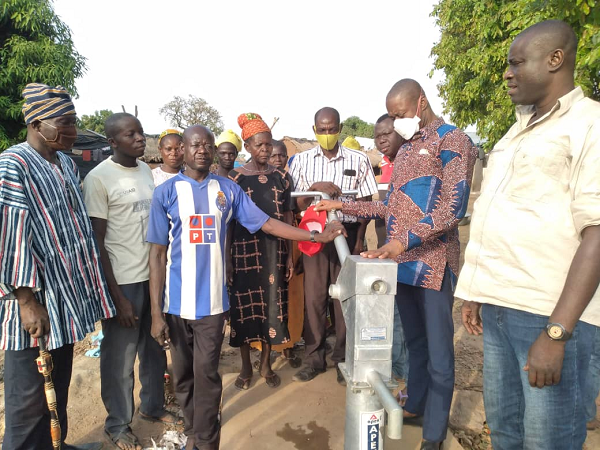 The Member of Parliament (MP) for Bole-Bamboi Constituency in the Savannah Region, Alhaji Yusif Sulemana has provided boreholes for three communities in his constituency.

The three boreholes sunk at the cost of GH¢45, 000 is to solve the perennial water shortages experience in the beneficiary communities during the dry season.

Alhaji Yusif also donated a tricycle ambulance worth GH¢13, 000 to the Kablima community where there is no a health facility to enable them transport pregnant women in labour and other emergency cases to Dakuripe, the nearest community that has a health facility.

Speaking at a brief separate ceremonies to hand over the boreholes and the ambulance to the beneficiary communities, Alhaji Sulemana said the gestures were all based on request and assessment needs by the communities.

He said the provision of the boreholes in the three beneficiary communities was based on requests since the people in the communities drink from dug-out dams that often dried up during the dry season.

He said it was also to ensure that his constituents who have no access to clean and safe water to have one to improve on their health status and standard of living.

Touching on the donation of the tricycle ambulance, Alhaji Sulemana said during the campaign period he visited the community and saw a pregnant woman who was in labour being transported on a motorbike to the nearest health facility at Dakuripe hence his decision to provide the people of Kabilma with the tricycle ambulance to solve the issue of lack of transportation for pregnant women in labour and the sick in the community.

He urged the beneficiary communities to take good care of the boreholes and the ambulance to prolong its lifespan and pledged his commitment towards meeting the needs of his constituents to improve on their standards of living.

Chief Safo Amantana of Gbilimpe and Chief Baba Akwasi of Kablima who received the boreholes and the tricycle ambulance on behalf of the beneficiary communities respectively , thanked the MP the gesture and said they would go a long way to improve on the living conditions of the people.
Medicines

The items were donated by International Medical Associates for Global Health Empowerment (IMAGHE), a non-governmental organisation (NGO) through the MP for Bole-Bamboi to the district health directorate.

Alhaji Sulemana thanked the donor for the support that he said would help improve on healthcare delivery in the area.

The Bole District Director of Health Service, Mr David Bakuri, who received the equipment on behalf of the directorate also thanked the donor for the gesture.