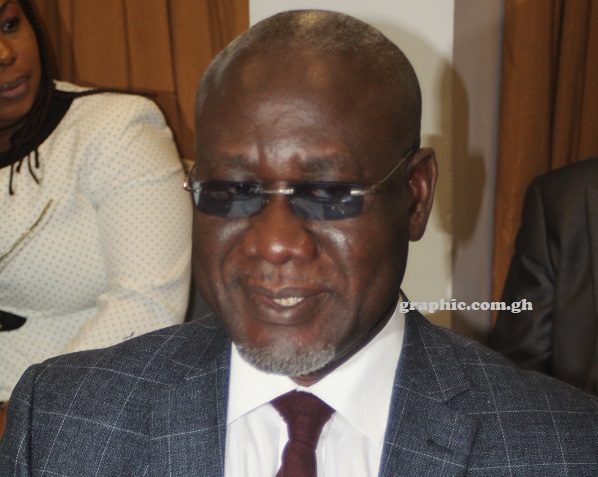 Seven more persons have been arrested in connection with the harvesting of babies and human trafficking in some health facilities in the Greater Accra Region.

This brings the number of suspects arrested in connection with the cases to eighteen, while three babies have been rescued following a joint operation by the Economic and Organised Crime Office (EOCO) and the Ghana Medical and Dental Council (MDC).

All the suspects are currently on EOCO enquiry bail while investigations continue.

Currently the babies, who were named Joy, Kwesi and Nyamekye by their buyers are in foster homes pending the final determination of the cases.

Briefing journalists in Accra yesterday, the Executive Director of EOCO, Commissioner of Police (COP) Mr Frank Adu-Poku (retd), said officials of the two agencies undertaking the investigations had received threats on their lives from some "faceless persons".

But he stated: " We are unperturbed about the threats of death on the lives of the investigative team. We will continue to collaborate to protect public health and safety by preventing and detecting organised crime".

Mr Adu-Poku cautioned the “unscrupulous and faceless individuals” to desist from spewing such threats, adding that the right authorities had been duly informed for the appropriate action to be taken.

He said work was ongoing to retrieve a fourth baby, aged two years, suspected to have been bought by a social welfare worker at the Tema General hospital, Nancy Nana Yaa Frimpong.

Mr Adu-Poku said Nancy and her boyfriend were alleged to have connived to buy the baby from a health facility which was yet to be identified.

Nancy, who was said to have supplied one of the babies for sale to undercover investigators at the Tema General Hospital, was arrested on February 4, 2021 after being on the run for weeks.

Two separate dockets on the case involving Dr Hope Mensah Quashie of the 37 Military Hospital, who also owns the Susan Clinic, a private health facility at Lartebiokorshie in Accra, and Dr Noah Kofi Lartey, a medical practitioner with the Obstetrician and Gynaecology Department of the Greater Accra Regional Hospital, Ridge, who also operates a private hospital known as the Dangme Community Hospital in Prampram are to be forwarded to the Attorney-General's Department.

Mr Adu-Poku said investigations into the baby harvesting and child trafficking syndicate started in February, 2020, based on a hint from a taxi driver, who suspected that two women who had hired his services might have bought a baby from Susan Clinic located at Lartebiokorshie.

The two women - Florence and Eleanor - were arrested at their residence at Manet in Ogbojo while they were attempting to abscond with the baby to Agona Swedru.

Investigations revealed that in 2019, Florence was introduced to Dr Mensah of Susan Clinic, to help her adopt a baby.

In February 2020, Dr Mensah contacted Florence and told her he had a baby available for adoption.

Florence, who was then in the USA, called Eleanor who was in Ghana to pick up the baby and made part payment of $2,500 to Dr Mensah for the baby.

It was agreed that Florence would pay the rest of the amount when she returned to Ghana.

The total amount agreed between Dr Mensah and Florence had not yet been established.

Florence was arrested on February 4, 2021 while in the country to allegedly formalise the adoption process of the baby.

In February 2020, Eleanor allegedly picked up the baby with a nanny, Aku Elevu, who had been taking care of the baby in the country since then.

Mr Adu-Poku said efforts were being made to contact Aku to assist with the investigations.

Following an earlier press conference on the baby harvesting syndicate, Mr Adu-Poku said some persons had petitioned EOCO to look into suspected cases of their babies or others who had been stolen at some health facilities.

He said on January 25, 2021, a banker petitioned EOCO that in April, 2016, she was taken to 37 Military Hospital as a result of pregnancy complications.

Dr Mensah, who was her doctor, referred her to his private facility because there was no bed available.

She stated that she had a natural delivery.