Mrs Audrey Ofosu-Gyeabour (left), Senior Officer-Accounts of the SIC Life Company Limited presenting a cheque to Miss Adwoa Oforiwaa Turkson (2nd right), of the Marketing and Sales Department of the Daily Graphic, at a short ceremony in Accra

Three more financial institutions have donated GH¢ 8,500 to the Graphic Needy Trust Fund. Their donatiion is to support the payment of the medical bills and post-operative care for Latifa Karim, a three-year-old cancer of the eye patient.

The institutions, SIC Life company, limited, an insurance Company donated GH¢4,500, while the HFC Bank and the Mamprobi branch of the Fidelity Bank donated GH¢2,000 each.

Additionally, Fidelity Bank presented a hamper containing provisions and fruits to Latifa and her family.

Making the presentation on behalf of the HFC Bank, the General Manager in charge of Finance and Strategy of the bank, Mr Benjamin Dzoboku, expressed the bank’s excitement to assist Latifa.

He explained that the managing director of the bank, whose attention was drawn to the appeal for funds  by the Graphic Communications Group Limited (GCGL)  in the  March 2, 2017 issue of the Daily Graphic  was  touched by little Latifa’s plight. 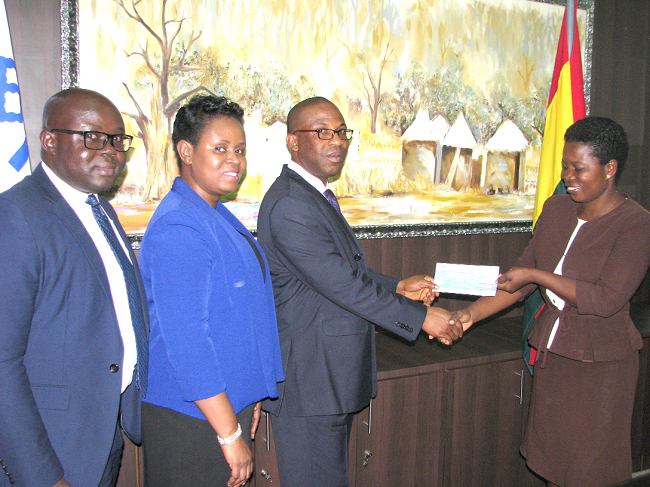 “As a bank with a heart, the management of the bank did not hesitate to support her because the gesture was in line with the bank’s corporate social responsibility,” he said.

Mr Dzoboku said the HFC Bank and its parent company, Republic Financial Holdings Limited of Trinidad and Tobago, believed in corporate social responsibility and always endeavoured to help members of the public through the bank’s power to make a difference and staff volunteering projects.

Receiving the donation on behalf of the (GNTF) a senior Corporate Communications Officer of the GCGL Ms Mavis Kyerewaa Boateng expressed the company’s appreciation to the bank.

Updating the bank on Latifa’s situation, Ms Boateng said Latifa had been relocated to Accra from Tamale and was undergoing treatment at the Korle Bu Teaching Hospital.

She explained that the (GNTF) was taking care of the upkeep of Latifa’s family who accompanied her and her twin sister Rahaman Karim, who was currently undergoing medical investigations to determine if she stood the risk of developing the cancer in future.

Ms Boateng appealed to corporate bodies and philanthropists to donate to the fund in order to assist other needy children who were on the fund’s waiting list.

Making the donation on behalf of the Mamprobi branch of the Fidelity Bank, the Branch Manager, Mr Eric Offei-Darko, said the gesture was part of the bank’s annual corporate social responsibilities. 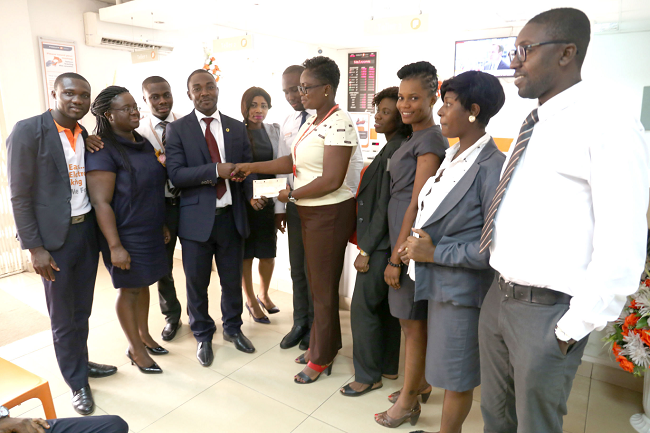 “We were touched by the predicament of little Latifa after reading the Appeal for support story in the Daily Graphic and decided to contribute towards her treatment and also pay her a visit at the hospital,” he said.

Receiving the donation on behalf of the Trust Fund, a Senior Corporate Communications Officer at the GCGL, Ms Yvonne Aryee, expressed gratitude to the bank and commended the bank for its response to the appeal.

For their part, the management and staff of SIC Life Company Limited also presented a cheque for GH¢4,500 to the GNTF to help Yasmeen Naa Djameh Frimpong, a one-year-old girl with hydrocephalus.

The presentation was in response to a GNTF appeal in the Daily Graphic for help for the child to undergo surgery.

A delegation from SIC Life who presented the cheque said the company’s corporate social responsibility focused on health and education, hence their response to the appeal.

The delegation also added that, “Health is a very important aspect of life, especially for children, so they should be given the chance to survive. “

Ms Adwoa Foriwaa Turkson, Research Manager, GCGL, received the cheque and thanked the delegation for coming to the aid of Yasmeen and promised that the Graphic Needy Fund would update them on the condition of the patient periodically.

The Daily Graphic on March 2, 2017, launched an appeal for Latifa Karim, a three-year-old girl from Zoosali, a village in the Savelugu Nanton Municipality in the Northern Region, who needs to undergo surgery.

So far, some corporate institutions, as well as individuals, have donated various amounts of money towards the surgery and post-treatment care of Latifa.

She is currently receiving treatment at the Korle Bu Teaching Hospital.