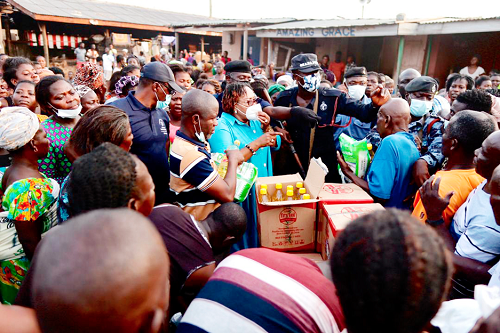 The Ministry of Fisheries and Aquaculture has presented food items to more than 15,000 artisanal fishers, fish processors and their dependents in 198 landing beaches in four coastal regions.

The items were to cushion the beneficiaries — spread across the Greater Accra, Central, Volta and Western regions — to cope with the fishing closed season.

The food items included 15,000 bags of rice and 7,500 cartons of cooking oil, while some of the beneficiaries received fishing nets and subsidised outboard motors.

The Minister of Fisheries and Aquaculture Development, Mrs Mavis Hawa Koomson, who led a team during the 15-day exercise, also distributed more than 6,000 fishing nets across the fishing communities to support the livelihood of the fisherfolk.

The ministry also subsidised 4,000 outboard motors for the fishermen in the four regions at GH¢10,000 each instead of the open market price of GH¢22,000.

The 2021 fishing closed season was scheduled for July 1 to July 31 for artisanal and semi-industrial fleet, while industrial trawlers would resume after August 31.

The closed season has been introduced based on advice, and its imposition was in consultation with the various fisheries associations.

The move, among others, was aimed at restoring Ghana's depleted fish stocks.

Mrs Koomson said fisherfolk were crucial in the country's development and sustainability as the fishing industry contributed largely to the gross domestic product.

She said the items were to build the resilience of the fishermen as they prepared to go back to fishing following the imminent opening of the sea to small-scale fishers on Sunday, August 1.

The initiative, she said, was also aimed at achieving a high compliance rate for the fishing closed season, an intervention to lessen economic hardships among the fisherfolk while the sea was closed to all forms of fishing activities.

Mrs Koomson commended the fishermen for observing the closed season voluntarily and for adhering to the directives of the ministry.