Minister hands over confiscated Rosewood to National Cathedral board 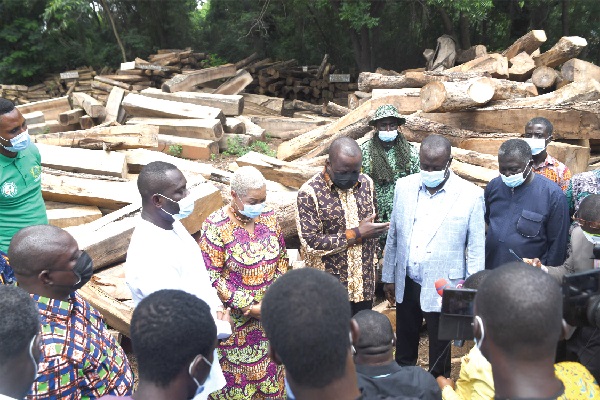 The Minister of Lands and Natural Resources, Mr Samuel Abu Jinapor, has handed over 18 containers of Rosewood that were impounded this year to the board of trustees of the National Cathedral.

The wood was handed over yesterday in fulfillment of the government's decision to donate all confiscated Rosewood to support the construction of the cathedral.

A ceremony was held at the Achimota Depot of the Forestry Commission in Accra where Mr Jinapor handed the wood over to the President of the Ghana Pentecostal and Charismatic Council (GPCC), Rev. Professor Paul Frimpong Manso, and the Executive Director of the Salt and Light Ministries, Rev. Dr Joyce Aryee, who are both members of the board of trustees of the cathedral.

Present at the event were the deputy ministers of Finance, Mr John Kumah, and Lands and Natural Resources, Mr Benito Owusu-Bio.

Clamp down on cartel

Speaking at the event, Mr Jinapor stressed that the government would go all out to clamp down on the cartel behind the illegal harvesting, transporting and exporting of the endangered tree species.

"We will go all out and ensure that the cartel and the syndicate behind the harvesting and exportation of Rosewood are actually dealt with so that we can preserve the forest cover of our country," he said.

The minister also reiterated the government's resolve to deal with all illegalities in the exploitation of the country's natural resources.

"When President Nana Addo Dankwa Akufo-Addo says the management of the natural resources of our country is going to be done in transparency, which accords with the highest standards of integrity, the President means exactly that; and those of us who have been given the privilege to assist him to preserve and manage the natural resources of our country are going to do so with a sense of integrity," he said.

For his part, Rev. Prof. Manso said the donation of the Rosewood was a major boost to the timely completion of the project, which was expected to be dedicated on March 6, 2024.

He assured the minister that the Rosewood would be put to good use.

The General Superintendent of Assemblies of God, Ghana, also urged members of the public to consider the national cathedral a national asset and support its construction.

He said although the board of trustees of the national cathedral project was happy about the fact that impounded Rosewood was being put to good use, the board was also concerned about the disregard for the ban on the trade in the wood.

"We are happy that a burden has been taken away from us, but we are also pleading with Ghanaians to be mindful of the environment. People should not break the law and continue to harvest Rosewood," he said.

The GPCC President further underscored the need for all citizens to be law-abiding and help to preserve the environment for posterity.

While expressing gratitude to Mr Jinapor for the donation of Rosewood to the cathedral project, Mr John Kumah said more needed to be done to make the project successful.