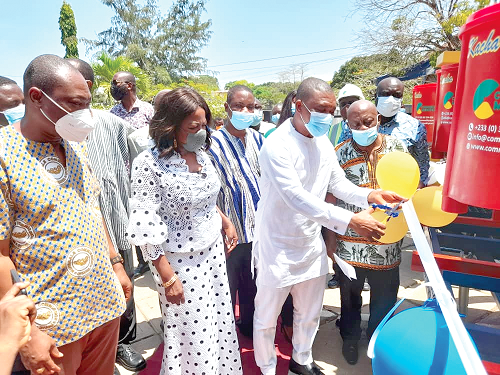 Mr Duker (2nd right), a Deputy Minister of Lands and Natural Resources designate, cutting the tape for the commissioning of the processing machines. With him are Mr S.K. Boafo (right), the Board Chairman of the Minerals Commission, and Mr Martin Kwaku Ayisi (left), the CEO of the commission

The combo machines, which will be deployed to selected mining communities on a pilot basis, will process and recover 90 per cent gold plus, using less water and without chemicals such as mercury and cyanide.

According to the commission, the machines, which were commissioned in Accra last Friday, could not be mounted on water bodies, as was done with traditional gold processing machines that used more water, mercury and cyanide.

The machines were brought into the country by a Ghanaian-owned company that has been registered as a mine support service provider to supply and service equipment for small-scale miners.

The Deputy Minister of Lands and Natural Resources designate, Mr George Mireku Duker, said the importation of the machines was a demonstration of the country’s commitment to the Minamata Convention, which requires signatory countries to reduce and, where feasible, eliminate the use and release of mercury from artisanal and small-scale gold mining (ASGM).

“We are ready to support the UN to implement the Minamata Agreement through the acquisition of the machines. I believe that adopting and operationalising this equipment in the country will go a long way to propel the small-scale mining sector, which the government wants to regularise for the local people,” Mr Duker said.

According to him, mining in water bodies and forest reserves must not be tolerated in the country.

The acting Chief Executive Officer of the Minerals Commission, Mr Martin Kwaku Ayisi, said the machines, which were estimated at between $60,000 and $100,000, would not only help small-scale miners to recover more gold but also save the environment.

He said if the government was providing incentives for companies to set up under the One-District, One-Factory (1D1F) programme, the same incentives could be offered small-scale miners “because they do not have the money to pay for these machines upfront”.

Mr Ayisi expressed the readiness of the commission to negotiate with small-scale miners to offer them flexible payment terms to enable them to acquire the machines.

The General-Secretary of the national association of small scale miners, Mr Godwin Armah, said having equipment that could be used to recover about 90 per cent gold and at the same time curb the use of mercury was a better option for small-scale miners.