Mine workers aggrieved over unfair treament by employers 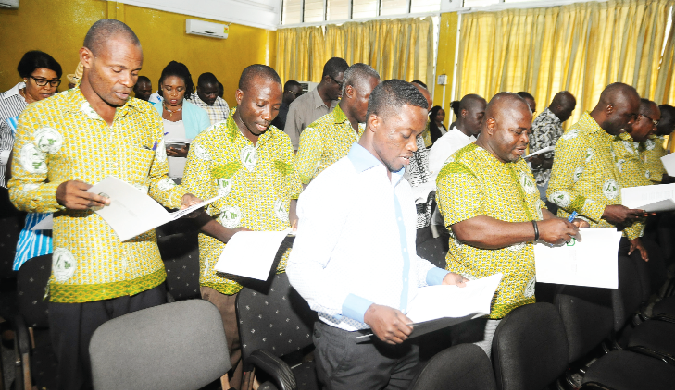 Members of the Ghana Mine Workers Union of the Ghana Trades Union Congress singing at the function in Accra. Picture: Emmanuel Quaye
30.5k Shares

Local mine workers have expressed concern over what they have described as precarious employment contract arrangements and strategies adopted by multinational mining companies in the country.

They claimed that some permanent workers in the sector were laid off for no specific reasons, only to be re-engaged in short-term or as casual workers.

The aggrieved workers described the growing trend as illegal and against international best practices.

The National Chairman of the Ghana Mine Workers Union (GMWU), Mr Kwarko Mensah Gyakari, who spoke on behalf of the group, however declined to mention the names of companies that were engaged in the practice but said if the situation was not checked immediately, it could have dire consequences in future.

Speaking at the opening session of a two-day meeting of the National Executive Council of GMWU in Accra last Wednesday, Mr Gyakari said, “Now there is a growing trend where permanent workers are declared redundant, only to be re-engaged as short-term fixed contract or casual workers by the same employers.

Acording to him, “what is even making the situation worse are the high rate of outsourcing, dwindling public sector employees, high rate of unemployment and the growing informal sector in the labour market.”

Mr Gyakari said the rate of inequality as far as the remuneration of mine workers in the country was concerned was not encouraging.

“The union is focused on addressing this glaring and unacceptable level of income inequality. This is because if the situation is not tackled properly, it could challenge the peace and stability in the country, especially when workers rise to protest against some of these unfair labour practices,” he added.

Going forward, Mr Gyakari called for the adoption of global compensation methods by the companies in order to maximise welfare and minimise recurrent cost to the industry.

The General Secretary of the Union, Prince William Ankrah, also called on the government to take a keen interest in reviving the Obuasi Mines to create jobs for the teeming youth in the country.

Earlier this year, AngloGold Ashanti announced arrangements with Rangold to revive the Obuasi Mine, but that has not begun.

“We cannot procrastinate the revamping of the Obuasi Mines any further as innocent people needlessly continue to live and die in poverty and deprivation.

“Consequently, we are calling on the government to prioritise the revamping of the Obuasi Mine within the shortest possible time in order to save lives and shore up the country’s foreign exchange,” he said.

Mr Ankrah commended the efforts of the Minerals Commission for crafting the Minerals Development Fund (MDF), noting that it was a confirmation of Ghana’s preparedness to ensure that the appropriate revenues due the various communities were collected from operators in the sector and put to good use.