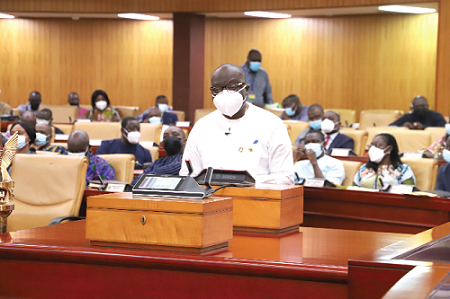 For the first time since 2017, the government has kept faith with its revenue and expenditure plans for the year, all in a bid to restore integrity to public finances and close the wide fiscal gap created by the raging COVID-19 pandemic.

Unlike previous years when the government altered originally programmed revenue or expenditure plans or both to help achieve a desired fiscal outcome, the Minister of Finance, Mr Ken Ofori-Atta, told Parliament Thursday, July 29, that the government would neither introduce new taxes and impose additional levies nor ask for more funds to help plug therevenue gap.

“Mr Speaker, this Mid-Year Fiscal Policy Review that I am presenting does not come with a supplementary budget, and our revised fiscal framework for 2021 is kept within the fiscal target of 9.5 per cent of GDP. We are staying within the 2021 Appropriation,” he told the packed House.

“Respectfully, Mr Speaker, let me repeat: I am not here today to ask for more money. I have not come to ask for more taxes. I have come to update the House on the performance of the economy for the first half-year of 2021 and our plans for the unexpired term of the year, consistent with Section 28 of the Public Financial Management Act (PFMA),” he added.

That, he said, was in spite of the fact that revenue collection had lagged behind targets by GH¢4.1 billion in the first half of the year, while COVID-19 challenges were testing the elasticity of expenditure plans.

Dressed in his traditional all-white kaftan apparel, the minister said the government would stick to its 2021 Budget Statement targets, which aimed to post a fiscal deficit of 9.5 per cent of gross domestic product (GDP) by raising GH¢72.5 billion in total revenue and grants and spending GH¢113.8 billion in total expenditures and arrears clearance.

In 2017 and 2018, the government revised the budget targets to accommodate the sluggishness in revenues in those years but requested for more money to make up lower-than-programmed revenues in 2019 and 2020.

Giving details about the execution of the budget in the first six months of the year, Mr Ofori-Atta said the government remained fully committed to achieving the fiscal deficit target of 9.5 per cent of GDP for 2021 in order not to derail from the objective of returning to the fiscal deficit rule and primary balance thresholds of five per cent of GDP and positive primary balance, respectively, by 2024.

“The provisional fiscal data for January to June 2021 show that total revenue and grants amounted to GH¢28.3 billion, equivalent to 6.5 per cent of GDP, against a target of GH¢32.4 billion or 7.5 per cent of GDP.

Giving an update on the impact of the COVID-19 pandemic, the minister said proactive and pragmatic policies introduced by the government had ensured that the tourism and hospitality industry, which had perhaps endured its most difficult year in 2020, was on a rebound.

“Mr Speaker, there are also other positive trends from this pandemic, as digital technology is assuming a more significant role in the operations of businesses. Almost nine out of 10 firms are now leveraging digital platforms to market their products. Similarly, mobile money, door-to-door delivery via courier services and Internet usage for business operations also increased by 77 per cent,” he added.

Meanwhile, an economist, Dr Said Boakye, in his preliminary remarks on the budget, hailed the decision by the government to stick to the budget targets, describing it as “the way to go”.

“It is good that they are managing expenditures to stay within the 9.5 per cent of GDP deficit target because the country does not have appetite for more borrowing. When your revenues are not performing and you do not intend to raise new taxes, then the prudent thing to do is cut expenditures to be able to stay within your targets.

“So, for me, it is the right thing to do; just that we need to know which expenditures are being cut. They need not be the growth-enhancing expenditures,” he said.