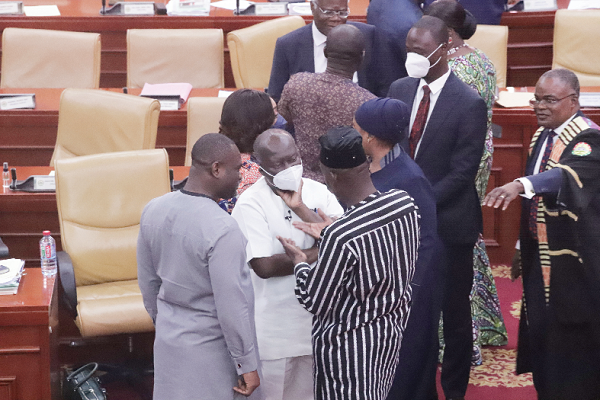 Haruna Iddrisu (back to camera), the Minority Leader, interacting with Ken Ofori-Atta (left), the Minister of Finance, after the budget presentation. Picture: GABRIEL AHIABOR
30.5k Shares

The Minister of Finance, Ken Ofori-Atta, has stated that the reconstructed Accra-Tema Motorway and Extensions Project, which is set to take off in September this year, will be tolled.

He said the project, which was at the procurement stage, would be tolled to recover the whole life cost of the completed infrastructure, as well as pay lenders and provide a return for equity investors in the public, private partnership venture.

To rake in more revenue, the government was also expected to introduce an upfront payment of Value Added Tax (VAT) by importers not registered for VAT, with effect from October 1, this year, Mr Ofori-Atta said when he appeared before Parliament yesterday to present the 2022 mid-year budget review.

Those were part of a raft of measures to engineer a quicker turnaround of the economy, he said.

The Finance Minister stressed the government’s commitment to turning around the fortunes of the economy within the next two-and-a-half years.

To achieve that, Mr Ofori-Atta said, it was keeping faith with the Ghana COVID-19 Alleviation and Resuscitation of Enterprises Support (CARES) ‘Obaatan Pa’ programme, which would be complemented by an Enhanced Domestic Programme (EDP) currently being developed.

The Finance Minister said the EDP, which would be the basis for the country’s negotiations with the International Monetary Fund (IMF), would enable Ghana to confront the economic uncertainties within the shortest possible time.

“This programme will stimulate economic growth, promote fiscal consolidation and enable us to re-emerge on the path of sustained transformation,”

He said in the coming months, the government would continue to optimise and support its flagship programmes and make strategic investments in the real sector to increase production, enhance productivity and create jobs.

The Finance Minister, who laid the revised budget, presented an abridged statement in which he provided terse updates on a few priority areas such as Year of Roads, Nation Builders Corps and selected flagship programmes, as well as revised macroeconomic and fiscal targets.

Mr Ofori-Atta said the government had a track record of navigating its way around the challenges and called on the citizenry to have faith in a quicker return to stability.

“Mr Speaker, just as we did in 2017 and 2020, the government is resolved to continue to provide the necessary leadership to turn the economy around.

“Let me assure you, on behalf of the President, that we will do it again within the next two-and-a-half years. To do this, we will proceed with great caution, thoughtfulness, creativity and grit; as the adage says, we shall ‘hasten slowly’,” he said.

Mr Ofori-Atta said the government was prioritising fiscal discipline, which involved sticking to agreed targets, cutting expenditure when revenue under-performed and ensuring prudent spending to get value for money.

“With discipline, dedication and hard work, we will overcome the current challenges that confront our nation,” he said.

“We are convinced we can do this again. We worked closely with Ghanaians to turn around the economic situation in 2017,” the minister added.

In line with the commitment to fiscal discipline, he said, revenue and expenditure targets for the year had been revised downwards to reflect the pressure remnants of the COVID-19 pandemic and the Russia/Ukraine crisis were exerting on the economy.

With that, he noted, total expenditure (including payments for the clearance of arrears) had also been revised downwards to GH¢135.74 billion; that is, by GH¢1.78 billion, the equivalent of 22.9 per cent of GDP, from the initial budget projection of GH¢137.53 billion, which should equate to 27.4 per cent of GDP.

Interest payments had, however, been revised upwards from GH¢37.45 billion (7.5 per cent of GDP) to GH¢41.36 billion (seven per cent of revised GDP), which Mr Ofori-Atta explained was mainly on account of inflationary pressures and exchange rate depreciation, resulting in higher cost of financing.

Mr Ofori-Atta said the government was expected to shore up the country’s reserves against international trade (Gross International Reserves) to cover imports for at least three months.

“Mr Speaker, as I have already indicated, the macroeconomic environment has significantly changed, prompting the revision of the macroeconomic framework. Furthermore, based on developments in the first six months of 2022 and the outlook for the rest of the year, we have, accordingly, revised the macro-fiscal targets for 2022,” he said.

On the government’s return to the IMF for support, he said: “Yes, I know this government assured the nation of a Ghana beyond Aid and our plans and programmes for economic transformation have been designed to achieve just that; indeed, I did say that Ghana would not embark on an IMF programme.

“We did not just say it; we also took measures towards the attainment of that objective, including the passage of the Fiscal Responsibility Act and instituting a number of irreversibility measures and also launching the Ghana CARES ‘Obaatan Pa’ programme for economic revitalisation and transformation.”

Mr Ofori-Atta said, unfortunately, unprecedented global developments over the past two years, especially in the last six months, had “really and truly disrupted the government’s efforts”.

“Governments across the world have had to change course to tackle the current crisis. Governments which less than a year ago were busily talking about energy transition and green and cleaner fuels have gone back to firing their coal plants,” he pointed out.

He added that the times were not ordinary — not for Ghana, not for Africa and certainly not for the whole world.

Mr Ofori-Atta encouraged beneficiaries of the National Builders Corps (NaBCo) programme, which ends on September 1, this year, to “take advantage of the YouStart initiative and other existing programmes in the drive to build an entrepreneurial nation”.

He indicated that the government had invested approximately GH¢2.2 billion in the programme, which, by the end date, would have run for four-and-a-half years.

The programme, he said, engaged 100,000 young graduates and prepared thousands of them for the world of work.

The Finance Minister also gave an assurance that the government’s comprehensive road programme, christened: ‘Year of Roads’, was very much on course, despite the fiscal situation of the country.

He provided updates on the projects, saying phase one of the Sinohydro Corporation Limited engineering, procurement and construction (EPC) contracts for 442 km of roads and two interchanges had seen significant progress.

He said other key road and bridge projects were also progressing steadily, including the La Beach Road Project (Lots 1 & 2), which included a three-tier interchange at Nungua; phase two of the Obetsebi-Lamptey Interchange and the flyover on the Accra-Tema Motorway from the Flower Pot (Spintex road).