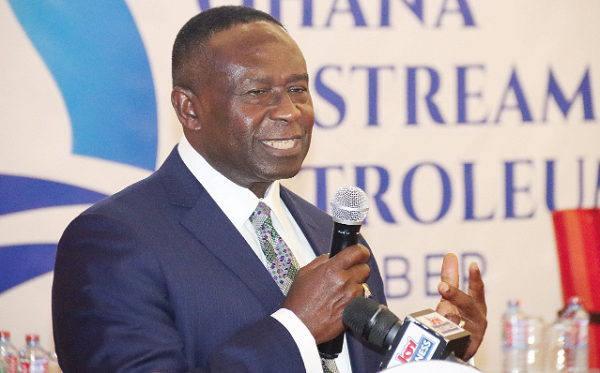 The government has been advised to re-focus on maximising the capacity of the Tema Oil Refinery (TOR) in the current challenge of fuel price hikes to help reduce the burden on ordinary Ghanaians.

This is because the country has got to a point where importing finished petroleum products should not be a priority, as it only increases the prices of fuel and, consequently, worsens the economic hardship.

The Chairman of the Ghana Upstream Petroleum Chamber (GUPC) and Senior Vice-President of Kosmos Energy, Joe Mensah, who gave the advice, explained that importing finished petroleum products was not good for the populace and the country because “the imported finished products are very expensive and, therefore, not affordable”.

Speaking at the maiden annual Oil and Gas Conference of the GUPC in Accra yesterday, Mr Mensah said: "We have TOR; let's make sure that we get it to a level where we can generate more fuel right here to help us.”

He said the failure of TOR to function had contributed to the comparatively high cost of fuel.

The conference was on the theme: "Transitioning to a low carbon economy".

It brought together explorers, oil and gas producers, indigenous suppliers and manufacturers in the industry, as well as representatives from the ministries of Energy, Trade and Industry, and Public Enterprises, the Petroleum Commission, members of the chamber and other key stakeholders.

Apart from TOR, Mr Mensah advised the government to also invest in more refineries, as the country had the human resource to manage those entities.

On the issue of energy transition, the Senior Vice-President of Kosmos Energy noted that the conference was being organised at a time the country was seeking to harness its hydrocarbon resources at a period of global energy insecurity.

He noted that with the right investment climate, the country could contribute to providing global energy security.

In a speech read on his behalf, the Minister of Energy, Dr Mathew Opoku Prempeh, emphasised that Ghana’s position on energy transition was towards responsible exploitation of natural resources for development and transition at the country's own pace.

For that, he said, there was the need to ensure that upstream operations were not injurious to the environment and lives.

The onus, he said, was on the government and the upstream sector players to ensure that exploration and production activities were undertaken in a sustainable manner.

He said in the last three decades, the country's carbon dioxide emissions from the energy sector had increased 11-fold from 2.5 million tonnes to 27.3 million tonnes, with the oil and gas sector accounting for 29.5 per cent of those emissions.

"This makes the sector the second highest contributor of CO2, next to the transportation sector, which contributes 33 per cent of emissions," he said.

Ghana must remain bride in industry

The Chief Executive Officer of the chamber, David Ampofo, noted that the oil and gas industry was relatively young, and that the chamber was on a mission to promote the well-being of the sector by providing a shared platform for members to protect and enhance their common interest, while ensuring high standards and industry best practices.

He said if the industry and the government could deepen their collaboration, the country would be well on its way to sustainable development, spurred on by increased proceeds from crude oil and harness domestic gas for the energy needed to transform the economy into a developed one.

He emphasised that the country's competitiveness in the oil and gas sector lay largely in the business environment it created for businesses to operate in.

Namibia, he said, had just discovered two enormous oil fields in Albian, with one being a potentially 20 billion barrel giant field.

To remain a "bride" in the industry, he said: "We need more investors to see Ghana as an attractive investment destination."

The chamber, in its energy transition position, made three main recommendations to the government — incentivise exploration and development to increase production, enhance gas infrastructure and optimise domestic gas utilisation and also seize opportunities in the emerging decarbonisation solutions.