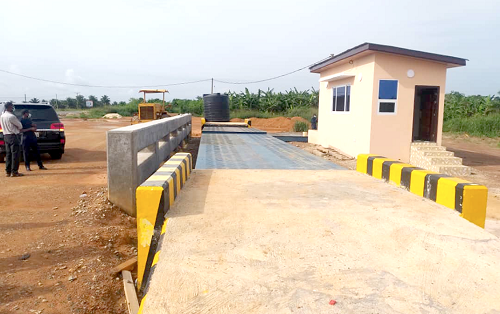 The weigh bridge at Apemanim in the Western Region

The construction of a bridge at Apemanim in the Ahanta West District in the Western Region for the weighing of manganese and bauxite for export is 85 per cent complete.

Work on the facility was begun in November last year and was expected to be completed by the end of the first quarter of this year but stalled following the outbreak of the coronavirus disease (COVID-19) pandemic.

When it becomes operational in August this year, the bridge will be a central point to ascertain and double-check the quantity of manganese and bauxite that is hauled from the mine sites to the Takoradi Port for export.

The Western Region is home to the production of both minerals and others that are exported through the Takoradi Harbour.

The Minister of Lands and Natural Resources, Mr Kwaku Asomah-Cheremeh, inspected progress of work on the bridge last Tuesday as part of his two-day working visit to the Western and the Ashanti regions.

At the site of the bridge, it was observed that concrete works on the main passage, supporting structures and other major components of the weighing bridge had been done.

What is left to be done are fixing of steel surfaces and the installation of automated weighing devices.

The minister expressed his satisfaction with the extent of work done on the bridge and asked that work be expedited to get the facility operational by August this year.

He said the weighing bridge was very important to the nation, as it would help it achieve accurate values on the quantity of manganese and bauxite it exported.

Mr Asomah-Cheremeh said Ghana had lost a lot of revenue through underhand dealings by some mining companies, the reason the decision to construct the weighing bridge was taken.

"As of now, determining the actual figures in terms of the dried metric tonnes (DMT) of manganese and bauxite is a problem; and the state is losing huge revenue because of a weak monitoring system. We, therefore, thought it prudent that we should know the accurate figures, so that we will know the actual amount the state should be getting at any point in time," he said.

The minister said in the absence of a refinery for manganese and bauxite, the best way for the country to benefit from the minerals was for monitoring regimes to be robust in checking discrepancies in values declared by mining companies.

In September last year, the government ordered weigh bridges to be installed at vantage points along highways that connect mining sites to the Takoradi Harbour.

The decision followed a financial and technical audit of all mining companies which revealed that the country was being short-changed by some of the companies.

The financial and technical audit of mining companies was begun in 2018, after a former Minister of Lands and Natural Resources, Mr John-Peter Amewu, had raised alarm about the way some mining companies were using fraudulent scales to short-change the country, leading to revenue losses.