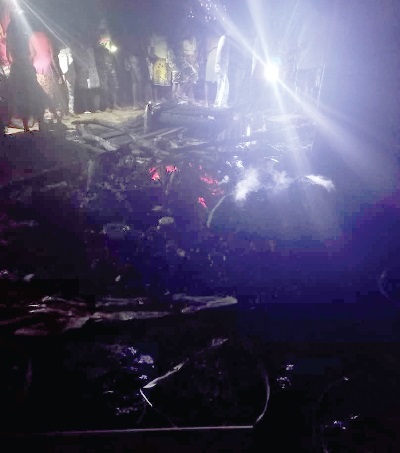 One person was burnt to death and property worth thousands of Ghana cedis were destroyed when blazing fire gutted a compound house at Akyem Asuboa South in the Asene-Manso-Akroso District in the Eastern Region last Wednesday dawn.

The deceased has been identified as David Amoako, a 73-year-old farmer, at the village.

He said he immediately informed personnel of the Ghana National Fire Service, and rushed with them to the scene of the reported fire outbreak.

Chief Supt Amoako said on reaching the scene, they realised that the fire had completely burnt two bedrooms of the compound house, destroying all the property in them.

He said the fire personnel managed to douse the fire, but later detected that the body of a male adult had been burnt beyond recognition in one of the bedrooms.

He said the body of the man, who was identified as the 73-year-old David Amoako, was deposited at the Oda Government Hospital for autopsy.

Chief Supt Amoako said the cause of the fire was not immediately known, and that the police were investigating how it occurred.