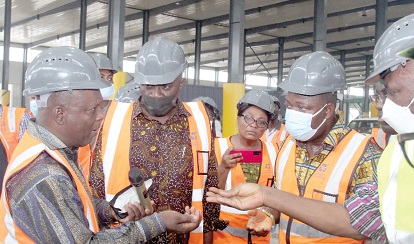 Michael Paid Tuwor (left), MD, Accra Compost and Recycling Plant, speaking with Dan Botwe (middle), Minister for Local Government, Decentralisation and Rural Development, at the compost. With them are some staff from the ministry Follow @Graphicgh

The Minister of Local Government, Decentralisation and Rural Development, Dan Kwaku Botwe, has directed district assemblies to deploy mechanisms that will ensure easy and flexible compliance with bye-laws on refuse disposal.

He said the assemblies should channel more efforts into the setting up of waste transit (transfer) stations in various municipalities before the onset of the rainy season.

A waste transfer station is a facility where municipal solid waste is temporarily staged in the course of its eventual journey to the landfill or recycling plant.

“It is one thing developing laws and it is another implementing them; but as much as people will be sanctioned when the laws are flouted, we should also make it easier for the laws to be obeyed and that is why the issue of transit stations must be prioritised,” Mr Botwe said in an interview with the media in Accra last Friday.

The interview took place during the minister’s working visit to some waste treatment plants of the Jospong Group of Companies (JGC) in Accra.

The Faecal Treatment Plant is managed by the Sewerage Systems Ghana Limited (SSGL) and the waste treatment plant also managed by the Accra Compost and Recycling Plant (ACARP). They are both subsidiaries under the JGC.

The minister has already visited the company’s waste treatment sites in Kumasi in the Ashanti Region.

Expressing satisfaction with operations at the two facilities, the minister observed that the facilities had gone through several phases of improvement and expansion since they were established.

“Last week, we had an opportunity to pay a working visit to the Kumasi Wastewater Treatment Plant and we were also satisfied with the work done in the Ashanti Region,” he stated.

The General Manager in charge of Private Sector Business at the SSGL, Lola Asiseh Ashitey, said since its establishment, the SSGL had built two new faecal treatment plants near Korle Lagoon and Adjen Kotoku and rehabilitated the Mudor Sewerage Treatment Plant at James Town.

She said the company had engaged a diligent and dedicated workforce trained to use technical innovations that were environmentally friendly.